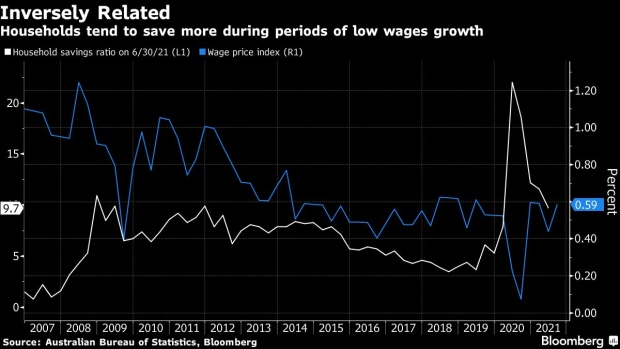 Pedestrians and cyclist pass closed restaurants at The Rocks in Sydney, Australia, on Monday, Aug. 30, 2021. Sydney had a record number of Covid-19 infections, accounting for the bulk of cases in New South Wales as Australia’s most populous state battles to contain the spread of the highly infectious delta variant. , Bloomberg

(Bloomberg) -- Australia’s economy probably posted its second-largest contraction on record as businesses were forced to shutter and states sealed borders to try to contain a raging outbreak of the delta variant of coronavirus.

Gross domestic product likely fell 2.5% in the June-to-September period from the prior quarter, economists predicted ahead of government data Wednesday. That would be the biggest fall since a 7% decline in April-to-June 2020, meaning the nation’s two worst quarters occurred during the pandemic.

Australia’s central bank has signaled a weak result will only be a “setback” and remains optimistic that “a swift rebound in economic activity” is likely, TD Securities in Singapore said.

For the outlook, much will depend on the omicron variant of coronavirus.

Here are three things to watch for in third-quarter GDP beyond the headlines.