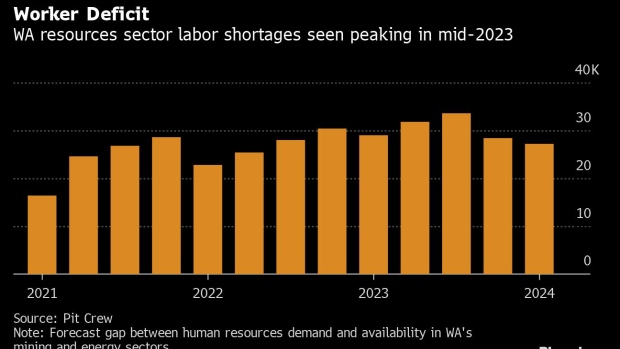 (Bloomberg) -- Some A$140 billion ($105 billion) in projects in Western Australia’s resources sector may not be fully realized unless the state addresses a chronic shortage in skilled workers, according to a industry group.

From electricians to metallurgists, the industry needs to attract up to 40,000 extra workers over the next two years, according to the report from consultancy Pit Crew, commissioned by WA’s Chamber of Minerals and Energy. The CME called on industry and government to collaborate on ways to combat the shortages.

Rio Tinto Group in its March quarter production report said labor resource availability had disrupted its maintenance work in the state, while Fortescue Metals Group Ltd. reported in May that labor constraints had contributed to rising costs at its Iron Bridge growth project in the Pilbara. Mineral Resources Ltd. said in April that a shortage of truck drivers meant that about 10,000 metric tons a day of its haulage capacity was sitting idle.

“We simply aren’t going to be able to address our workforce needs within the talent pool that is currently available in WA or, indeed, the country,” Paul Everingham, CME’s chief executive officer, said in a statement. “Therefore it’s essential government ‘leans in’ with a forward-looking plan on skills migration where it is in the national interest, and obviously is safe to do so.”

Miners have blamed the labor shortages on snap state border closures in response to outbreaks of the Covid-19 virus, which has hampered the mobility of W.A.’s legion of interstate fly-in fly-out workers. But a longer-term issue is Australia’s international border closure -- expected to remain in place until at least the middle of 2022 -- which is denying resources companies access to international expertise.

“There is a clear need to explore ways we can access international markets to bring in workers with targeted and vital skills, while continuing to ensure the health and safety of the community,” said Everingham. Shortages had become a lot more acute since August, 2020 when workforce modeling showed a need for an extra 8,000 operational staff, he added.

Everingham said the industry was being hit by a perfect storm, in which maintenance work postponed due to Covid-19 was now ramping back up and resources companies were also looking to fast-track work on growth projects to cash in on booming commodities prices. There was also hot competition for skilled and experienced workers across the country in a number of different sectors.