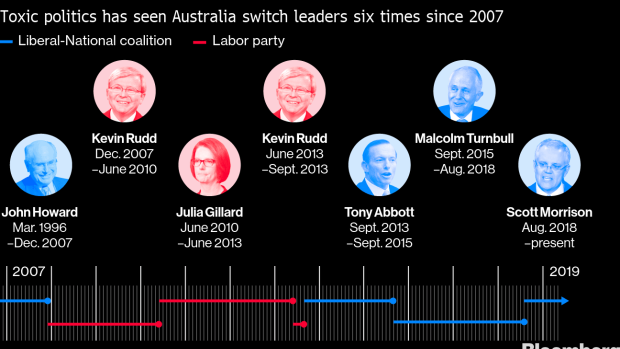 Scott Morrison during an election night event in Sydney on May 18. Photographer: David Gray/Bloomberg , Bloomberg

The Liberal-National coalition will secure 77 seats in the 151-member lower house, the broadcaster’s election analyst Antony Green said. The victory is the biggest come-from-behind win in a generation after Morrison successfully urged voters not to risk a change of government amid a slowing economy.

The local currency rose as much as 1% early Monday before paring gains to trade 0.4% higher at 68.96 U.S. cents as of 9:12 a.m. in Sydney, reflecting relief that the opposition Labor party’s election platform of redistributing wealth and boosting the minimum wage was rejected by voters.

Morrison’s pitch for economic stability was at the heart of his coalition’s successful bid for a third term in office, as he warned voters against backing the most progressive agenda in decades from Labor. Despite the coalition trailing in most opinion polls, Morrison closed the gap with a relentless attack on Labor’s pledge to take tougher action on climate change and strip tax perks from wealthy Australians.

The coalition is getting straight back to business pledging to pass signature tax cuts to shore up the economy. Just hours after claiming victory, the coalition said it aimed to deliver tax relief for about half of Australia’s 25 million people when parliament reconvenes, perhaps as soon as next month.

“That is our priority piece of legislation,” Treasurer Josh Frydenberg told reporters Sunday. Rebates of as much as A$1,080 ($742) could deliver a crucial boost to consumer spending and help buoy an economy in its 28th year of unbroken growth.

The victory turned Morrison into a conservative hero, with President Donald Trump tweeting “Congratulations to Scott on a GREAT WIN!” For Labor leader Bill Shorten, 52, the loss was akin to Hillary Clinton’s 2016 failure to win the U.S. presidency. He ended up resigning as party chief on a night he expected to celebrate a resounding win.

“He criss-crossed the country with great energy, belief and conviction,” Frydenberg said. “He was assured, he was confident, he was across the detail.”

Liberal lawmaker Arthur Sinodinos, a former adviser to prime minister John Howard, lauded Morrison’s tactical prowess in mapping out the regions the coalition needed to concentrate on to boost its chances of re-election.

Morrison was the Liberals’ third leader in four years and only took the helm in August. His predecessors Malcolm Turnbull and Tony Abbott were both ousted by their own lawmakers amid deep ideological divides within the party, not least over energy and climate policy.

The victory, and the fact that party rules have now been amended to make it harder to topple leaders, may ensure Morrison is the first prime minister since 2007 to survive a full term.

The jubilation in the government’s ranks contrasts sharply with the soul-searching among Labor lawmakers. Shorten ran on Australia’s most progressive agenda in decades, including tax cuts for low income workers, increases to the minimum wage, sweeping emissions curbs and scaling back concessions for property and stock market investors. That presented a big target for Morrison, with blanket TV ads warning Shorten was “the Bill Australia can’t afford."

Shortly after conceding defeat, Shorten announced he would step down as opposition leader until the party selects a new leader. His deputy Tanya Plibersek is expected to stand, and infrastructure spokesman Anthony Albanese has thrown his hat in the ring.

Australia’s era of growth is a developed-world record. But the harshest housing downturn in a generation and a deepening trade war now threatens that streak, leaving voters receptive to Morrison’s call for continuity. Growth may slow to a six-year low of 2.2% this year, according to economist forecasts compiled by Bloomberg.

Morrison’s argument appears to have resonated in Queensland, where Adani Power Ltd. wants to build a controversial mine that could lead to a doubling of Australia’s coal exports. Despite heated opposition from environmentalists, the coalition was set to pick up two seats in the state. Primary vote support there for Labor, which equivocated on its support for the mine as it struggled to balance the need to create blue-collar jobs with its environmental pledges, sank to 27%.

“It is hard to craft a message that can speak to the whole country at once,” Jill Sheppard, a political analyst at the Australian National University, told Bloomberg Television Monday, noting Labor’s climate policies did not resonate as well in Queensland. Shorten “probably did not craft that message very effectively to different parts of the country.”

To contact the editors responsible for this story: Edward Johnson at ejohnson28@bloomberg.net, Michael Heath