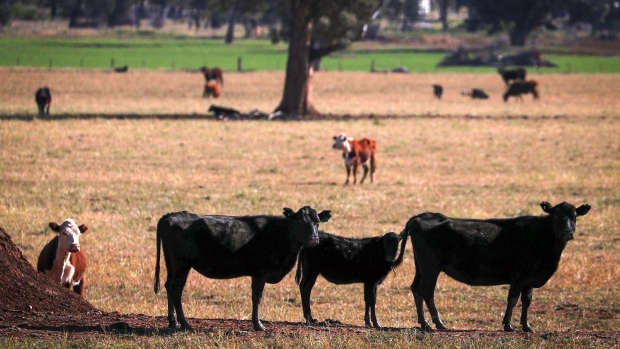 Cattle graze at a farm in Gunnedah, New South Wales, Australia, on Wednesday, May 27, 2020. A growing number of Australia's primary producers are mulling the potential for a further tightening of restrictions on Australia's agricultural exports by China. Two thirds of Australia’s farm production is exported, with almost one third of this, 28%, going to China, including 18% of Australia's total beef production, according to Australia's National Farmers' Federation. Photographer: David Gray/Bloomberg , Bloomberg

(Bloomberg) -- Australia has released its first national biosecurity plan in a bid to protect its environment from pests and diseases that could devastate the agricultural sector.

“Strong and efficient biosecurity is even more important as we respond to emerging challenges including diseases on our doorstep,” Agriculture Minister Murray Watt said in a statement Tuesday.

Australia has been on high alert for foot-and-mouth disease in its cattle herds as the disease is has ripped through Indonesia in recent months and traces of the virus were found on imported animal products in July. An outbreak in Australia could have an estimated direct economic impact of A$80 billion ($55.8 billion), mostly driven by trade restrictions that could see Australian exporters locked out of more than 150 overseas markets.

READ: What Foot-and-Mouth Threat Could Mean for Australian Beef Supply

The virus is likely to now to persist for a number of years in the Southeast Asian nation. Still, Indonesian authorities appear to be more successively managing the outbreak, particularly in Bali where tens of thousands of Aussie tourist travel each year, Watt said last week.