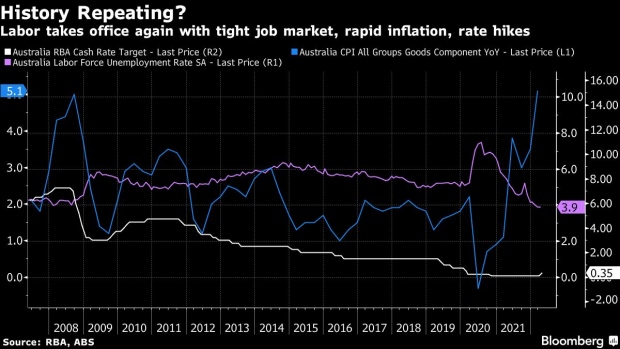 While unemployment at a near-50 year low suggests that characterization is more about lowering expectations than reflecting economic realities, he does confront significant challenges. Real wages are falling by the most in more than two decades, the central bank is raising interest rates for the first time since 2010, and the post-pandemic budget is deep in deficit and pushing national debt toward A$1 trillion ($700 billion).

Then there’s the darkening offshore environment with Australia’s key trading partner, China, slowing due to virus-induced lockdowns and war in eastern Europe driving up global inflation. Wayne Swan, who served as treasurer for much of the 2007-2013 Labor government, says his former adviser will be up to the job.

“He’s got more experience coming into this job than just about anyone in living memory and that should serve the country well,” Swan said in an interview.

Chalmers, 44, gave counsel to Swan through much of that period, which encompassed the 2008 global financial crisis and China’s massive stimulus response. He sat with Swan at the major meetings of the era, when Australia’s mining boom also reignited and triggered the Reserve Bank’s previous tightening cycle.

The 2007-2013 Labor administration was immersed in climate change policy as well, including legislating a carbon tax, so Chalmers is well versed in the carbon emissions debate. That includes the crucial economics -- and politics -- of the energy transition.

He is very much a modern political prototype: highly educated, he worked as a political adviser to a senior minister, Swan, before graduating to secure his own seat in parliament in 2013 and then moving to the shadow ministry. It’s a similar trajectory to that followed by his immediate predecessor, the center-right coalition’s Josh Frydenberg, who lost his seat in Saturday’s ballot as well as his ministry.

Critics of this professional class see its members as lacking real-world experience and prone to point scoring more associated with university politics.

“It is a double-edged sword,” said Zareh Ghazarian, a Melbourne-based professor at Monash University’s School of Political and Social Inquiry.

On the positive side, these “professionals” come to the job with experience of the political sphere, they’re familiar with the settings and procedures and they can get on with it, he said.

“The challenge is they may come in without much real experience from other roles in other workplaces and that sees them out of touch and potentially limits their capacity for good public policy,” he said.

Chalmers has a PhD in political science from the Australian National University and his doctoral thesis was on the prime ministership of Paul Keating, who led the country from late 1991 until early 1996. That followed Keating’s eight-year stint as treasurer, when he oversaw the floating of the currency, removal of tariff barriers and freeing up of financial markets.

Chalmers’ thesis was titled “Brawler Statesman,” reflecting Keating’s ruthless domination of the parliamentary chamber. At the same time, Keating sought to reshape Australia’s economy and steer the nation toward finding security in Asia rather than from it, having taken over as prime minister just as the Soviet Union collapsed and the Cold War ended.

Chalmers is a Keating fan and reportedly speaks regularly with the septuagenarian former leader. Yet what characterized Keating was a willingness to put both his standing and sometimes even his office on the line in pursuit of change. Many of these risks subsequently paid off and enhanced the former prime minister’s status.

Little in Chalmers’ biography, or that of most modern professional politicians, suggests a willingness to take chances with their careers.

“Keating was treasurer and then PM three decades ago. It was a different world,” Ghazarian said. “You can’t emulate what these former leaders have done. It’s worth consulting as these people have experience, good political instincts, etc, but you can’t recreate a different era.”

One of Chalmers’s perceived strengths is a strong affinity with his electorate of Rankin, a working class district southwest of Brisbane where he was born and raised and now lives. It gives him a link to voters he represents.

Keating, in a profile of Chalmers in the Australian newspaper two years ago, highlighted the similarities with his own background in the western Sydney suburb of Bankstown. He argued representing an area you’re born and bred stands a treasurer in good sted to understand the electorate.