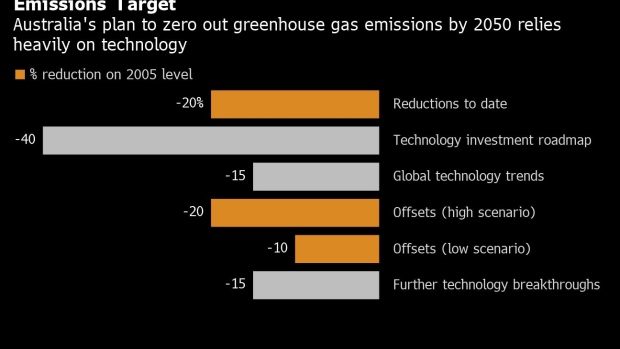 Anthony Albanese, leader of the Labor party, delivers his keynote address during the AFR Summit in Sydney, Australia, on Wednesday, March 10, 2021. The summit concludes today. , Bloomberg

(Bloomberg) -- Australia’s opposition Labor Party is pledging to set a 2030 emissions reduction target in a stark contrast to the incumbent conservative government, which is facing mounting global criticism over its climate policy.

A Labor administration would commit to cutting emissions by 43% by 2030 over 2005 levels, opposition leader Anthony Albanese said Friday. His party is leading in opinion polls, ahead of a general election due by May next year.

Albanese said Labor’s climate policy would trigger A$76 billion ($53.7 billion) of investment, create more than 600,000 jobs and modernize the electricity grid, as well as cut average household power bills by A$275 a year.

“It’s the plan that acknowledges that the world economy is demanding this,” he said. The government’s climate policy shows it “is frozen in time while the world warms around it,” Albanese said.

Prime Minister Scott Morrison has declined to set short-term climate goals and is under pressure from lawmakers within his government who rely on voter support in communities tied to coal and gas production. Australia was also one of the last major economies to set a target to reach net-zero emissions by 2050, and a plan released in October has been pilloried over its dependence on offsets and yet-to-be developed technology.

Climate politics have been particularly poisonous in Australia, one of the world’s top per capita emitters of greenhouse gases, and Morrison’s predecessor was removed by his own party after advocating stronger action.

Albanese on Friday ruled out the prospect of introducing a new charge on Australia’s polluters for their emissions. When in office in 2012, the center-left Labor Party had implemented a policy that was labeled a “carbon tax” -- and later removed -- by its conservative opponents.

According to Labor, its policies will also: