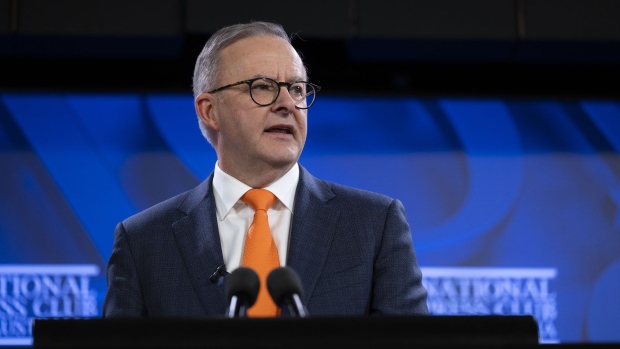 Anthony Albanese, Australia's prime minister, speaks during an event at the National Press Club in Canberra, Australia, on Monday, Aug. 29, 2022. Albanese has promised a shift to an era of "reform and renewal" for his government once the period of Covid-19 recovery is over, in a speech marking 100 days since he took the top job. , Bloomberg

(Bloomberg) -- Australia’s center-left Labor government is celebrating the passage of its signature industrial relations legislation on the last sitting day of Parliament for 2022, wrapping up a busy six months in power for the new Prime Minister Anthony Albanese.

The industrial relations legislation passed Australia’s Parliament on Friday morning after a series of late-night sittings in the Senate to ensure the laws were enacted before the end of the year.

One of the most controversial aspects of the new legislation was restoring the ability for employees across multiple businesses to negotiate together for pay rises and better conditions. The Labor government said the laws were essential to raise workers’ wages while the opposition and business leaders said they would lead to strikes and unnecessary costs.

Speaking before the new laws passed, PM Albanese said the laws were a “victory for the working people of Australia.”

The passing of the Labor government’s industrial relations laws comes just one week after the six-month anniversary of Albanese’s election win in May. Since that time, the new government has enacted a number of policies promised in its election campaign.

Since gaining power, the Albanese government has enacted Australia’s first carbon emission targets, created a national anti-corruption commission and laid the legislative groundwork for a 2023 vote on greater recognition for Indigenous Australians in the country’s constitution.

Jill Sheppard, a political analyst at Australian National University, said it had been a “pretty strong finish” to the year for the government, wrapping up many of its political priorities and delivering on election promises.

“If all the voters remember going into Christmas is the last month, then that’s a massive win for the government,” she said.

But Albanese is still expected to announce his plans to avoid major electricity price rises, currently in negotiation with state governments, as early as next week. The new regulations has already faced push back from major gas and coal producers.

Larger tests for the government wait in 2023 as well -- the new prime minister has staked much of his political capital on the referendum due to be held in the second half of the year on recognizing Indigenous Australians in the constitution, Sheppard said.

“This is a real risk to the government that they will potentially put their reputation and put their credibility behind a referendum that might not succeed,” she said.