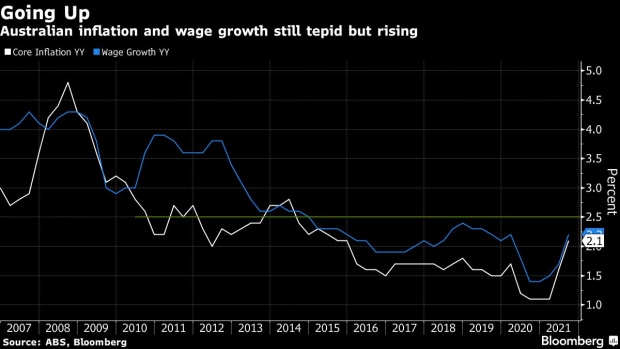 (Bloomberg) -- Australia’s private sector shrank for the first time in four months and business confidence dived in response to a surge in Covid-19 cases that also brought employment growth to a halt.

The IHS Markit Flash Australia Composite Output Index tumbled to 45.3 in January from 54.9 in December, bringing to an end three consecutive months of expansion. Business confidence fell to the lowest level since April 2020.

“The Australian economy had slipped from a state of strong recovery in end-2021 to being affected by the surge in Covid-19 infections,” said Jingyi Pan, economics associate director at IHS Markit. “Supply issues meanwhile remained prevalent, with lengthening of lead times, reports of supply shortages and labor constraints persisting.”

The result highlights the impact of an omicron outbreak that erupted just as Australia moved to trying to live with Covid, throwing up a hurdle to the $1.5 trillion economy’s recovery. The consensus view is there’s likely to be a mild slowdown in growth in the first quarter of this year, followed by a rebound as cases subside, underpinned by strong demand from cashed-up households.

The price pressure is significant for Australian policy makers who have been trying to revive inflation that in recent years has barely reached the lower end of the Reserve Bank’s 2-3% target. If supply-chain disruptions and a labor squeeze persist, the RBA could be forced to tighten policy earlier than its current indication of late 2023.

Australia reports inflation data for the final three months of 2021 on Tuesday and the RBA board meets a week later, with policy makers due to decide the fate of a bond-buying program.