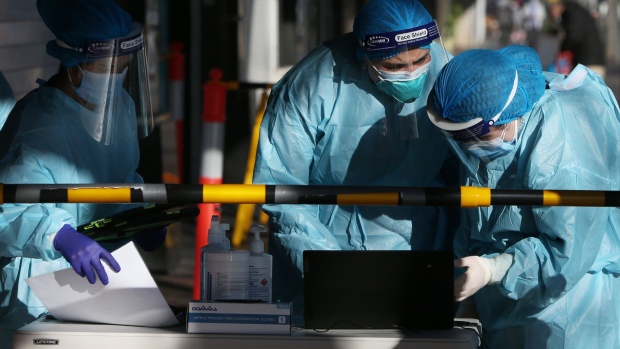 SYDNEY, AUSTRALIA - JULY 30: Medical staff assist people queueing at a medical centre to undertake COVID-19 testing in the district of Fairfield on July 30, 2021 in Sydney, Australia. Covid-19 lockdown restrictions in hot spot local government areas have increased with masks required outdoors at all times and residents limited to movement within a 5 kilometre radius of their homes. Police have been given more authority to enforce public health orders with the help of the Australian Defence force as Greater Sydney enters an extended lockdown through to August 28th in order to contain the highly contagious Covid-19 delta variant. (Photo by Lisa Maree Williams/Getty Images) Photographer: Lisa Maree Williams/Getty Images AsiaPac , Photographer: Lisa Maree Williams/Getty Images AsiaPac

The lockdown takes affect at 4 p.m. local time, according to the state’s Deputy Premier Steven Miles.

Victoria state earlier on Saturday reported two new locally contracted cases of the virus. Officials in the New South Wales state capital of Sydney, the epicenter of Australia’s outbreak, are due to hold a briefing later in the day.

Sydney’s delta-outbreak cases have forced Australia’s largest city into a lockdown that will be implemented for at least nine weeks. It was extended this week for a third time until Aug. 28.

Australia’s federal government said Friday the country would begin reopening and avoid snap lockdowns once 70% of the entire adult population has been fully vaccinated. The country’s vaccine roll-out has been tardy in comparison to other developed nations such as the U.S. and U.K., with only enough doses to cover 23% of the population administered.