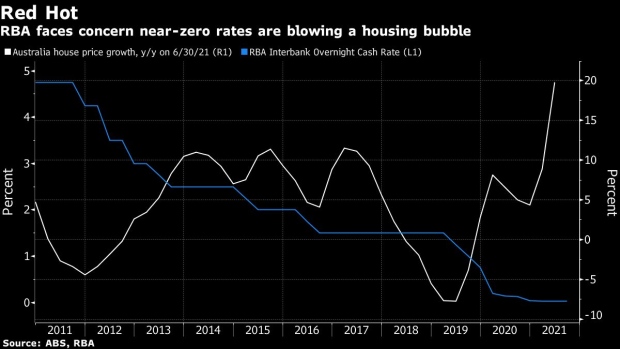 Homes stand in the Bella Vista suburb of Sydney, Australia, on Wednesday, June 3, 2020. Australia’s economy contracted in the first three months of the year, setting up an end to a nearly 29-year run without a recession as an even deeper slowdown looms for the current quarter. Photographer: Brendon Thorne/Bloomberg , Bloomberg

(Bloomberg) -- The unrelenting surge in Australia’s home prices -- rising by hundreds of dollars a day in Sydney and Melbourne -- is fueling momentum for macroprudential measures to contain credit growth and keep a lid on swelling financial risks.

Driving the gains are record-low official interest rates, which Reserve Bank of Australia Governor Philip Lowe is expected to hold at 0.1% at the Oct. 5 meeting. While Lowe cut weekly bond purchases to A$4 billion ($2.9 billion) last month, the RBA consistently has said it doesn’t expect to raise interest rates until 2024 at the earliest.

That leaves tighter lending rules as the only way to rein in the property market, which is increasingly unaffordable for regular workers in major cities. Citing concerns over financial stability, the International Monetary Fund called last week for lending curbs to tame the red-hot prices.

The central bank has said it’s constantly assessing tools, but has held back until now as it focused on supporting the economy with the coronavirus leaving much of the population-heavy east coast in lockdown. The government, which must go to the polls by May, also seemingly wants action on house prices.

“They do seem to be homing in on high debt-to-income loans,” said Felicity Emmett, a senior economist at Australia & New Zealand Banking Group Ltd. in Sydney. “On balance, it’s more likely to happen before the end of the year.”

Housing is roaring in response to ultra-low rates, a phenomenon seen across the developed world as central banks eased policy to support economies during the pandemic. Prices in Australia have risen at more than 10 times the pace of wages, raising a major barrier to entry for first-home buyers.

The rapid house-price gains in Sydney and Melbourne come despite protracted lockdowns, and as growing household debt raises financial stability issues. The RBA has ruled out tightening policy to cool asset prices -- unlike South Korea, and as New Zealand’s central bank appears set to do at its Oct. 6 meeting -- focusing instead on pushing the economy to full employment.

The RBA doesn’t control macroprudential tools directly. Rather, they fall under the remit of the banking regulator, which is in regular discussions with the central bank. The Australian Prudential Regulation Authority plans to publish an information paper on its framework for implementing macroprudential policy in coming weeks.