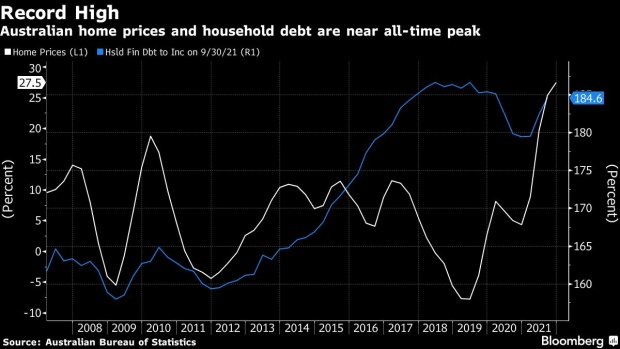 Residential buildings in Sydney, Australia, on Thursday, March 17, 2022. Sydney, scene of some of the world's fastest house-price growth, is showing early signs of turning down. Photographer: Brendon Thorne/Bloomberg , Bloomberg

(Bloomberg) -- Australia’s soaring property prices drove household wealth to a record last quarter, while net worth on a per capita basis also hit an all-time high, suggesting the wider population was better off on average.

Household wealth climbed 4.5% to A$14.7 trillion ($11 trillion) in the final three months of 2021, the Australian Bureau of Statistic said in a report on Thursday. Home values contributed 3.5 percentage points to the quarterly increase. Demand for credit was also the strongest on record at A$54.4 billion.

Record-low borrowing costs and government incentives during the pandemic have sent house prices soaring in major cities and regions. The data highlight how massive fiscal and monetary support to help households and firms through Covid lockdowns have inflated asset prices across the wider economy.

That augers well for consumer spending, which accounts for more than half of the country’s A$2.2 trillion annual output.

In a sign the labor market is set to extend its powerful run, separate data showed job vacancies hit a record in the three months through February. There was also evidence of more firepower in the housing market, with another report showing approvals to build new homes jumped 43.5% last month, driven by private houses and apartments.

Economists are increasingly predicting property prices will cool in the period ahead as the Reserve Bank of Australia embarks on a policy tightening path, having held rates at 0.1% since November 2020. Economists expect the first rate hike in August.

Sydney’s Frothy Housing Market Is Showing Signs of Turning Down

“The excess savings that many households have gained will really help them to keep their consumption up during periods of high inflation and higher interest rates, even if home prices do fall,” said Adelaide Timbrell, a senior economist at ANZ Banking Group Ltd.

“We also only expect a very shallow fall in housing prices, after a very intense increase, and that would really reduce the risk of consumption falling over,” she said. ANZ is predicting nationwide home prices to decline by 6% in 2023.