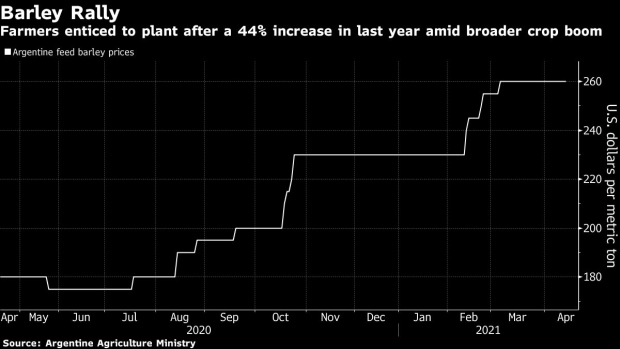 A farmer operates a combine harvester as he unloads wheat into a grain cart during a harvest at a farm near Gunnedah, New South Wales, Australia. , Bloomberg

(Bloomberg) -- Farmers in Argentina are pouncing on a trade feud between grain rival Australia and voracious crop buyer China.

Argentine growers are set to expand barley plantings by 28% this year after China slapped tariffs on Australian exports of the grain used in livestock feed, one of a slew of similar restrictions imposed by Beijing amid souring relations.

Farmers on Argentina’s Pampas crop belt usually compete with Australia for a share of global wheat sales while sending their barley to camel herds in Saudi Arabia and other parts of the Middle East. But the diplomatic upheaval -- coming amid rising concern among Argentine farmers that the government may raise wheat-export taxes -- has opened a door to ally China.

Australia has been China’s biggest provider of barley over the past decade, according to MIT Media Lab data through 2019, with the Asian giant regularly sourcing well over half of its imports from Australian farms.