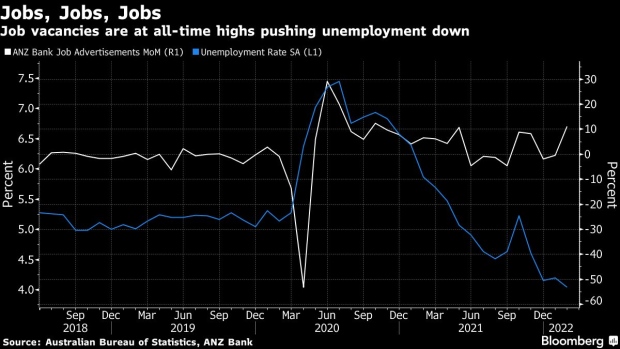 A silhouetted pedestrian outside a train station in Sydney, Australia, on Wednesday, Dec. 29, 2021. Hospitalizations due to coronavirus in Australia’s most-populous state have reached the highest level since mid-October, as a surge in omicron cases throughout most of the nation pressures the health system. Photographer: Brent Lewin/Bloomberg , Bloomberg

Employment rose by 4,000 in April from a month earlier, as a surge in full-time roles was partly eroded by a drop in part-time positions, Australian Bureau of Statistics data showed Thursday. Unemployment fell to 3.9%, matching forecasts, while labor market participation slipped to 66.3%.

“The last time the unemployment rate was lower than this was in August 1974, when the survey was quarterly,” said Bjorn Jarvis, head of labor statistics at the ABS.

The strength in Australia’s labor market is a key reason why the country’s central bank expects wages growth to accelerate to 3% this year from 2.4% now, allowing it to extend a rate tightening cycle that began this month.

The RBA raised rates by 25 basis points to 0.35% on May 3, its first hike in 11-1/2 years, and indicated further increases are in prospect. Financial market pricing points to an outsized 40-basis-point increase in June followed by hikes every month through December.

Should that come to pass, the cash rate would reach 2.7% by year-end, a heavy burden for Australia’s heavily indebted households.

Still, Prime Minister Scott Morrison will use the strength of today’s report to burnish his center-right government’s economic credentials as it bids for a fourth term in an election on Saturday. The opposition Labor Party has had a clear lead in opinion polls, though two surveys this week showed that was narrowing.

Labor is backing bigger pay rises for workers, pointing out the economy recorded the biggest fall in real wages in two decades in the first three months of the year.