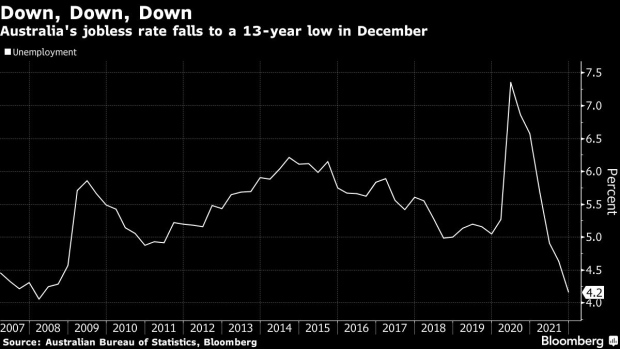 Commuters disembark a tram in Sydney, Australia, on Monday, Oct. 11, 2021. Residents of New South Wales who have received both doses of the covid vaccine were on Monday again allowed to start visiting non-essential retail stores, pubs and gyms, with capacity limits. The government eased lockdown measures once 70% of people over age 16 were fully vaccinated. , Bloomberg

(Bloomberg) -- Australia’s unemployment rate tumbled to a 13-year low as a hiring boom extended into December, even as surging coronavirus cases cast a shadow over the economic outlook in the near-term.

The unemployment rate fell to 4.2%, the lowest level since 2008 and easily beating the median estimate of 4.5%, Australian Bureau of Statistics data showed Thursday. The economy added 64,800 roles last month, compared with a forecast 60,000.

The survey was conducted in the first two weeks of December when cases of the omicron variant were still benign.

Jobs are among the last major data before the Reserve Bank of Australia is due to decide the fate of its bond-buying program. The board meets Feb. 1 and is likely to either taper quantitative easing or scrap it altogether, depending on the economic outlook.

The result will also be a much-needed boost for the nation’s conservative government that’s trailing in opinion polls ahead of an election due by May.

It’s aiming to buttress its economic credentials after facing criticism over chaotic management during the omicron outbreak that has left everyday Australians clamoring for rapid antigen tests, painkillers and fresh food at supermarkets.

In addition, an increasing number of staff are in isolation due to illness, causing the country more acute pain from the variant.