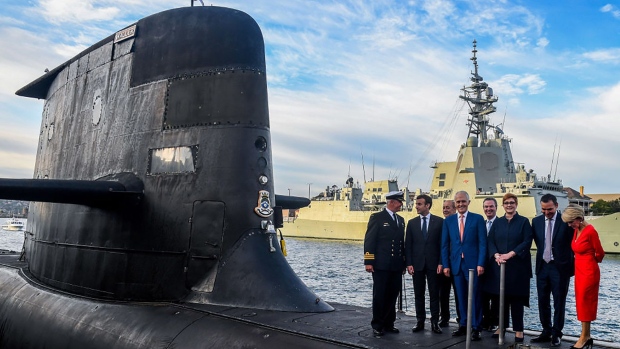 (Bloomberg) -- Australian Prime Minister Scott Morrison said France was aware of Australia’s concerns on the capability of submarines being built by the European nation, defending his government’s decision to sign a new deal for nuclear-powered ones.

Australia understands France’s disappointment but the decision was made on “sovereign, national defense interests,” Morrison told reporters on Sunday. It would have been “negligent” to not opt for submarines with supreme capabilities, he said.

“Ultimately, this was a decision about whether the submarines that were being built at great cost to the Australian taxpayer were going to be able to do a job that we needed it to do when they went into service,” the prime minister said. “Our strategic judgment based on the best possible intelligence and defense advice was that it would not,” he said, referring to the French ones.

Last week, Morrison unveiled plans to buy nuclear-powered submarines in a joint announcement with U.S. President Joe Biden and U.K. Prime Minister Boris Johnson. The new partnership effectively sinks Australia’s 2016 deal with French shipbuilder Naval Group for as many as 12 conventional submarines in a project that had gone over budget but seemed secure.

France recalled its ambassadors to the U.S. and Australia in a diplomatic slap intended to convey its anger. There was no back-stabbing of the French, Morrison said.

“They would have had every reason to know that we have deep and grave concerns that the capability being delivered by the attack-class submarine was not going to meet our strategic interests,” he said.

“Australia’s interests are best served by the trilateral partnership that I have been able to form with President Biden and Prime Minister Johnson,” Morrison said. “That’s what I think ensures that we can contribute more significantly to peace and security in the Pacific region.”