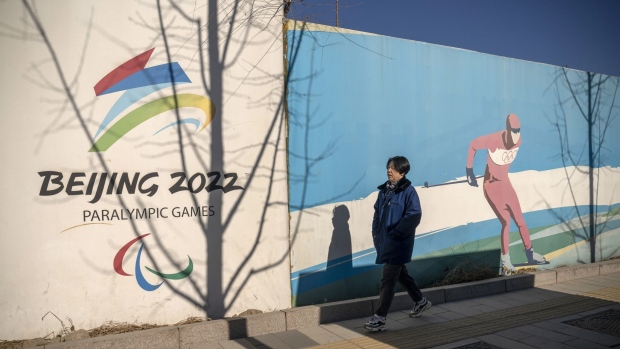 A pedestrian passes a hoarding set up for the Beijing 2022 Winter Olympic and Paralympic Games at Shougang Park in Beijing, China, on Thursday, Jan. 13, 2022. Beijing said it will conduct the winter games in a so-called “closed loop”, with participants only allowed to move between Olympic venues and other related facilities, and to use designated transport services. Photographer: Andrea Verdelli/Bloomberg , Bloomberg

(Bloomberg) -- Australian athletes attending the Beijing Winter Olympics have a right to express their political opinions, Sports Minister Richard Colbeck said in an interview with the Sydney Morning Herald, amid concerns that China could come down hard on views criticizing its government.

Colbeck said while athletes should respect Chinese laws, the International Olympic Committee had guaranteed freedom of speech for competitors at the Beijing Games next month.

“The IOC has made it clear that all athletes have the right to political opinions and the freedom to express them including through social media and media interviews,” he said in comments published Friday.

“Any threat aimed at Australian athletes for speaking out, therefore, is very concerning and is not at all supported by the Australian government,” he added.

Colbeck isn’t attending the Games as part of a diplomatic boycott by Australia, U.S., Canada, New Zealand and the U.K. over human rights abuses by the Chinese government in Hong Kong and the western region of Xinjiang. Athletes from these countries are still allowed to compete on the international stage.

Olympians Told to Leave Phones at Home to Dodge Spying

A member of the Beijing 2022 organizing committee made world headlines this week when he said international athletes would face cancellation of accreditation or other “certain punishments” if they made statements or gestures especially against Chinese laws and regulations. China’s Ministry for Foreign Affairs said Wednesday those comments had been taken out of context, noting that the IOC had asked athletes not to protest at Olympic venues or podiums.