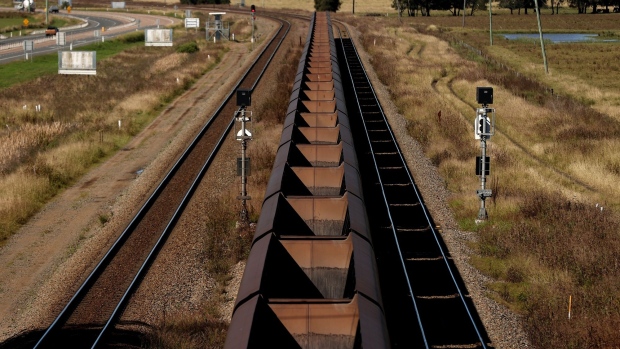 An empty coal train heads towards the coal mines outside of Singleton, New South Wales, Australia, on Friday, May 6, 2022. A coal-mining community that has elected the same political party for more than a century could decide Australia’s next government this month in an election that has divided the nation over how to battle climate change. , Bloomberg

(Bloomberg) -- Australia’s minerals exports are set to reach unseen heights for a second year, as a global crunch lifts the value of the nation’s coal and natural gas.

Unprecedented income from liquefied natural gas and coal as Russia’s invasion of Ukraine roils energy markets will more than offset waning earnings from top export iron ore, the Australian Department of Industry, Science, Energy and Resources said. The nation will ship A$419 billion ($286 billion) of metals and energy commodities in the year to June 30, 3.5% more than in the prior period and 13% more than estimated in its previous quarterly report.

In a world bereft of readily available energy supplies -- and increasingly disruptive volatile weather -- the price for thermal coal has rocketed to a record just as global economic activity rebounds from Covid-related slowdowns. The loss of some Russian supply from world markets has compounded the outlook, in which prices are expected to drift down but remain, on average, at relatively high levels, the department said.

Steady volume growth will also help boost the headline figure -- which, if actualized, would mark a second consecutive year of earnings in excess of A$400 billion, the department said.

Oil prices, while near the highest in a decade on the back of fears abou419t looming shortages from EU sanctions on Russia, are expected to retreat as the global supply picture gradually outpaces the recovery in demand. Spot LNG remains volatile amid heightened global uncertainty, with prices likely to remain “very high for some time” as nations scramble for alternatives to Russian gas, according to the report.

Beyond energy, iron ore earnings are expected to slip further, despite optimism about improving demand from China as Beijing doubles down on efforts to boost its economy and a forecast increase in volumes. With recovering supplies out of Brazil, as well as gains in output elsewhere, prices are expected to fall over the outlook period. The steelmaking material’s share of total minerals exports will drop to just over a quarter from almost a third in the prior period.

Higher global interest rates pose a downside risk to global economic activity and, by extension, resource and energy export earnings, according to the department. Income is expected to fall to A$338 billion in 2023–24, which would still be the third-highest ever, it said.