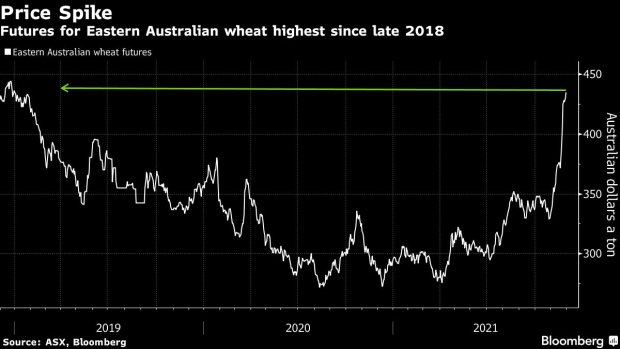 (Bloomberg) -- Australia, one of the world’s biggest wheat growers, boosted its official production forecast by more than 5% to a record, but warned that heavy rains and floods had damaged the crop in the east of the country.

Global wheat prices are near the highest in nine years and importers have been looking to Australia for extra supplies of the grain used in everything from bread and cakes, to pastries and bagels. Torrential downpours at the wrong time in New South Wales and Queensland hurt the crop and reduced the quality.

The Australian Bureau of Agricultural & Resource Economics and Sciences raised its prediction for the country’s wheat crop to 34.4 million tons from 32.6 million tons in September. The forecaster also increased its estimate for canola production by 14% to a record 5.7 million tons, offering more supplies to a global market trading near all-time highs because of a crop failure in Canada.

Early spring rainfall had helped yields across eastern states, while cropping regions in South Australia and Western Australia were boosted by rain and mild temperatures in October. The damage and losses from torrential rains in November are likely to be worst in New South Wales.

Receivals of grain are already showing signs of reduced quality, though canola crops are indicating good oil content, the forecaster said. There is a risk that more heavy rains in December could spur further downgrades and the potential for more crop losses. The national winter crop is expected to reach a record 58.4 million tons, an increase of 6.6% from the September forecast.

Other notes from Abares: