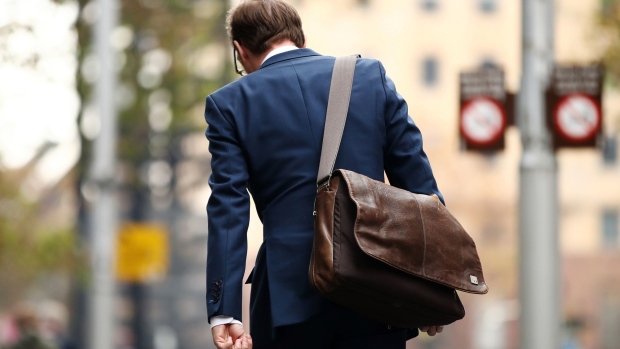 A pedestrian crosses a street near a tram in Sydney, Australia, on Tuesday, Oct. 13, 2020. Australia last week released a fiscal blueprint that pushes debt and deficit to a peacetime record just hours after the central bank signaled a willingness to ease further as both arms of policy press to drive down unemployment. Photographer: Brent Lewin/Bloomberg , Bloomberg

(Bloomberg) -- Australian employment tumbled for a second consecutive month and the jobless rate advanced as a surge in the delta variant of coronavirus kept businesses shuttered in the country’s two biggest cities.

The economy shed a worse-than-expected 138,000 roles in September, official data showed Thursday. The unemployment rate edged up to 4.6% and would’ve pushed higher without so many people dropping out of the job market.

Australia’s labor force participation has shrunk by about 330,000 in the past three months amid stringent mobility restrictions in Sydney and Melbourne.

“Looking ahead, the labor data will continue to reflect the impact of lockdowns in the near term,” said Sarah Hunter, chief economist for BIS Oxford Economics. “Notwithstanding the capacity for a robust recovery in the economy it is likely to be well into 2022 before the labor market fully recovers.”

That’s likely to reinforce the Reserve Bank’s confidence in its decision to push back its next review of a bond-tapering program to February, allowing the economy time to gather momentum and hiring to resume.

Australia’s populous east coast is beginning to exit a protracted lockdown, with Sydney making a tentative reopening Monday after 106 days under stay-at-home orders. Consumer sentiment has held up through the lockdown and the Reserve Bank says employers have tried to stay connected with staff in expectations of a quick recovery.

Among other details in today’s report:

“I am not too concerned about the outlook for the labor market,” said Diana Mousina, senior economist at AMP Capital Investors Ltd. “Even though it does look like a big fall in employment in September I think jobs growth will bounce back once Victoria and New South Wales fully reopen.”

Still, the loss of almost 285,000 positions in two months underscores the need for monetary policy to remain accommodative. The RBA has reiterated the need for the cash rate to remain at an all-time low of 0.1% until at least 2024 as wage and inflation pressures are likely to remain subdued.

Governor Philip Lowe sees light at the end of the tunnel, though, pointing to the bank’s business liaison and data on job vacancies which suggest that many firms are seeking to hire workers as surging vaccination rates allow authorities to ease restrictions.