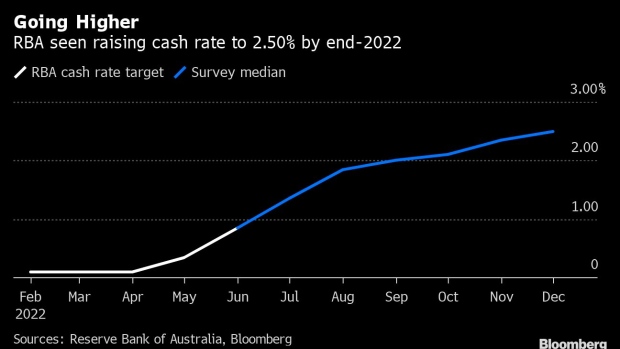 (Bloomberg) -- Australia’s central bank is set for back-to-back half-percentage point interest rate hikes for the first time ever as it beefs up efforts to rein in escalating inflation, according to a Bloomberg survey of economists.

Of 26 respondents, 25 expect the Reserve Bank of Australia to raise its cash rate to 1.35% on July 5 from 0.85% now. That will follow a larger-than-forecast half-point hike last month and take benchmark policy to the highest since May 2019. Market Economics is alone in calling for a bigger 0.75% move.

The RBA is among more than 80 monetary authorities to have raised rates this year as soaring power prices and higher labor costs exacerbate offshore pressures from Russia’s war on Ukraine.

Goldman Sachs Inc., which correctly predicted June’s 50-basis-point rate increase, is among those forecasting the RBA will follow up with another half-point hike in July and keep raising the benchmark to 3.1% by year’s end.

Singapore-based rates strategists at TD Securities had forecast a 65-basis-point rate rise on Tuesday but changed their call overnight to now predict a half-point move. They are aligned with Goldman in projecting the RBA cash rate at 3.1% by year-end.

Economists at Commonwealth Bank of Australia Ltd, the nation’s top lender, say 50 basis points is the “obvious choice” for July 5, but see the RBA treading cautiously thereafter. They expect the cash rate to rise to 2.1% by December, below the 2.5% median in the survey and 3.2% implied by money markets.

Concerns that consumers will cut back on spending in response to policy tightening have prompted some economists, including those at CBA, to predict rate cuts later next year.