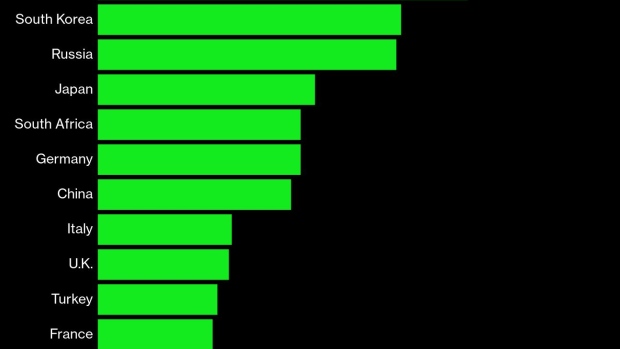 (EDITORS NOTE: Image was created using a variable planed lens.) Haze shrouds the Sydney Harbour Bridge in Sydney, New South Wales, Australia, on Wednesday, Jan. 8, 2020. As Sydney faced another day of toxic haze shrouding the skyline, U.S. weather satellite captured the smoke crossing South America and spreading out over Buenos Aires before it drifted into the Atlantic Ocean -- some 7,328 miles (11,793 kilometers) east of Sydney -- according to the National Oceanic and Atmospheric Administration. Photographer: Brent Lewin/Bloomberg , Bloomberg

(Bloomberg) -- Australia, one of the world’s top per-capita polluters, finally agreed to a plan to zero out its carbon emissions by 2050.

Prime Minister Scott Morrison announced the target days before he is scheduled to head to Europe for G-20 talks and then the COP26 climate summit in Glasgow. It follows a new round of fractious domestic debate on climate policy, an issue that’s riven Australia’s politics for more than a decade and comes after pressure from allies including the U.S. on Australia to show more urgency in action to limit global warming.

“We will set a target to achieve net zero by 2050, and have a clear plan for achieving it,” Morrison said in an emailed statement Tuesday. “We won’t be lectured by others who do not understand Australia. The Australian Way is all about how you do it, and not if you do it. It’s about getting it done.”

The government will stick with 2030 goals that have been criticized by activists and business leaders alike as too weak, adding to the sense that timid pledges from developed nations are stifling prospects for major progress at the climate talks. Morrison on Tuesday reiterated that Australia was on track to “meet and beat” its target and that he would provide an update on progress in Glasgow.

Australia is one of the top suppliers of fossil fuels, and the sector accounts for almost a quarter of its export earnings. The nation is being looked at to help show leadership that’ll encourage developing countries to step up their efforts. Saudi Arabia, the biggest oil exporter, on Saturday pledged to a goal to hit net zero by 2060.

Read more: As COP26 Nears, the Toughest Goals Are Still Out of Reach

Morrison has frequently ruled out taxes for polluters, and backed the country’s top emitters to devise the best solutions to help Australia hit net zero. His government also hasn’t ruled out subsidizing new coal-fired power stations, with the fuel still responsible for the bulk of the nation’s electricity generation.

That’s a blow for COP President Alok Sharma, who has struggled to win momentum for his ambition to “consign coal to history.” Nations like Australia and China, which is lifting coal output to ease an energy crisis, have resisted calls to more quickly phase out their own consumption of the fuel.

While every Australian state and territory -- and key trading partners China, Japan and South Korea -- have committed to net-zero emissions, a national target is politically complicated for Morrison, who must hold elections by May and trails the main Labor opposition in opinion polls.

Lawmakers within the National Party, the junior member of Australia’s governing coalition, have raised concerns over the threat to rural jobs, particularly in coal-mining communities, from an energy transition and demanded a series of concessions in return for their support.

The Australian newspaper reported that the Nationals had received a guarantee that the government would take no action to pursue a methane target. The U.S. and the European Union have been seeking to use COP26 to announce that at least 35 countries joined a global pact to cut methane emissions.

(Updates with methane pact in final pararagraph. An earlier version was corrected to clarify the origin of the statement.)