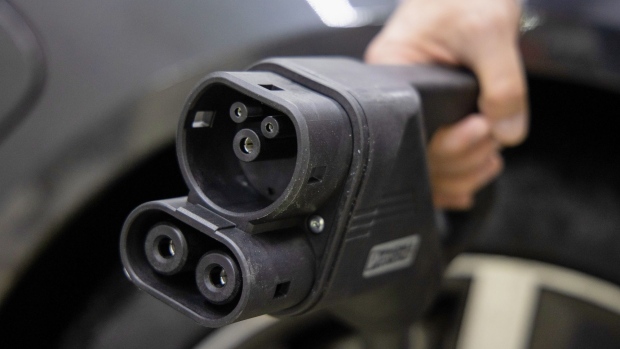 An electric vehicle (EV) charging plug at the Parus Electro LLC production site in Moscow, Russia, on Friday, Feb. 18, 2022. Russia, one of the world’s biggest oil and gas producers, has a plan to bring more electric vehicles to its roads over the next three years and to build a market for battery-powered cars. Photographer: Andrey Rudakov/Bloomberg , Bloomberg

(Bloomberg) -- Australia will target carbon emissions from vehicles to boost the uptake of electric cars, which account for just 2% of new-auto sales in the country.

The recently elected center-left Labor government will release a discussion paper on the National Electric Vehicle Strategy next month, Climate Change and Energy Minister Chris Bowen said in a speech in Canberra on Friday. Bowen said Australia’s uptake of low-emissions vehicles was five times lower than the global average.

“We believe that now is the time to have an orderly and sensible discussion about whether vehicle fuel efficiency standards could help improve the supply of electric vehicles into the Australian market, to address the cost-of-living impacts of inefficient cars, and to reduce emissions from the transport sector,” Bowen said.

“What we can’t accept is the world’s dirtiest cars in Australia,” she said.

Cannon-Brooks, the co-founder of Atlassian Corp. who is pushing power producer AGL Energy Ltd. to shut its coal-fired plants, also applauded the move.

“The maturity with which the government seems to be tackling the problem is refreshing,” he said. “Our standards have to catch up to where the rest of the world is.”

Australia lags behind much of the rest of the world when it comes to EVs, and is the only OECD nation other than Russia not to have, or be in the process of developing, fuel efficiency standards, Bowen said. That leaves automakers little incentive to offer electric cars in Australia as they prioritize countries where they must meet strict emissions standards.

There’s just eight EV models priced under A$60,000 ($41,500) to choose from in Australia, compared to 26 in the UK, Bowen said. The minister blamed the lack of electric vehicle uptake on the policies of the previous government. “If the intent of electric car policy in Australia has been to limit their availability and make them more expensive than they need to be, then the policy has been successful,” he said.

In 2019, former prime minister Scott Morrison said policies to encourage electric vehicle use would “end the weekend” and drive up the cost of petrol-powered cars.

The Labor government went to the election pledging to increase uptake of electric cars across Australia as part of its policies for tougher action on climate change. Labor pledged to construct a network of EV charging stations across the country and lower prices of EVs by cutting fringe benefits tax and import tariffs.