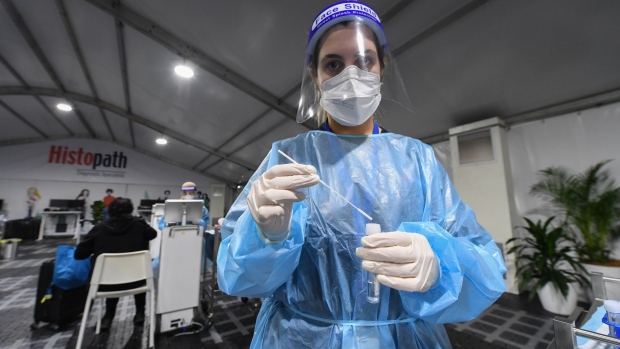 SYDNEY, AUSTRALIA - NOVEMBER 23: A nurse prepares a PCR test on a passenger at an on-site pre-departure testing clinic for COVID-19 outside the departures hall at Sydney Airport on November 23, 2021 in Sydney, Australia. A new COVID-19 testing clinic currently capable of 4000 tests per day has opened at Sydney Airport to provide international travellers rapid testing within 90 minutes for a fee of $79.00 Australian dollars. Australia's COVID-19 border restrictions were lifted on 1 November to allow people to travel overseas without government exemption, with most airlines and countries now requiring proof of a negative COVID-19 test within 72 hours of departure. (Photo by James D. Morgan/Getty Images) , Photographer: James D. Morgan/Getty Images AsiaPac

Returning Australian citizens and their dependents who have been in any of those countries in the past 14 days must enter supervised quarantine on arrival. Other travelers from those locations will not be allowed to enter Australia.

The travel restrictions come after the World Health Organization said that a strain of coronavirus first detected in Southern Africa, now known as omicron, poses a threat that could confound countries’ efforts to slow the spread of Covid-19. Scientists say the variant carries a high number of mutations in its spike protein, which plays a key role in the virus’s entry into cells in the body.

Governments from the U.S. to Hong Kong tightened restrictions on travel from countries in southern Africa after the discovery of the new mutation.

Hunt said that people who have arrived in Australia in the past 14 days from the nine countries under travel restrictions must get tested immediately and isolate for two weeks.

No cases of the omicron variant have been identified in Australia, Hunt said. He added that one person who recently arrived from South Africa and tested positive for Covid is currently in quarantine in the Northern Territory, but that the strain of their infection is not known.

The health minister said the government would “reserve the right” to strengthen or ease restrictions, “if the medical evidence shows that further actions are required.”

More than 70% of the eligible Australian population is fully vaccinated, according to the Bloomberg Vaccine Tracker.