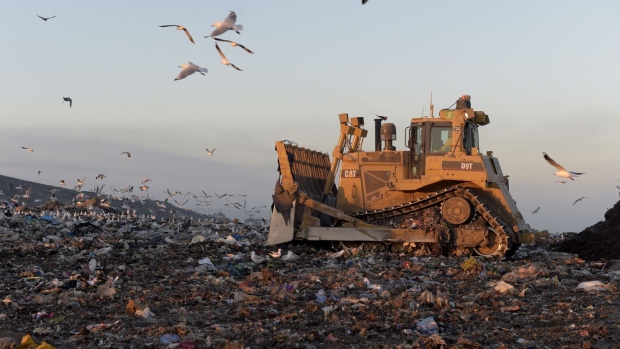 A bulldozer moves garbage in a landfill cell at the Melbourne Regional Landfill site, operated by at Cleanaway Waste Management Ltd., in Ravenhall, Victoria, Australia, on Wednesday, June 14, 2017. Cleanaway, the nation's largest garbage company, has the potential to extract enough gas from rotting rubbish to produce electricity for as many as 80,000 homes, according to Chief Executive Officer Vik Bansal. , Bloomberg

(Bloomberg) -- A new A$100 million ($69 million) investment fund aims to boost the proportion of refuse recycled in Australia and encourage innovation to prevent trash from ending up in landfills, the government said.

The Australian Recycling Investment Fund, to be managed by the Clean Energy Finance Corp. (CEFC), is part of a A$167 million government plan to tackle plastic waste and halve food waste by 2030, Environment Minister Sussan Ley said in a statement Sunday.

“The Australian Recycling Investment Fund will provide the CEFC with the capacity to support waste and recycling technologies by making investments which attract private sector support and by working with strategic financing partners to attract additional investments into this sector,” Minister for Finance Mathias Cormann said in the statement.

The government has invited applications to address Australia’s waste and recycling challenges to the corporation, which has facilitated more than A$24 billion of clean energy projects since its inception in 2012, it said.

To contact the editors responsible for this story: Shamim Adam at sadam2@bloomberg.net, Jason Gale