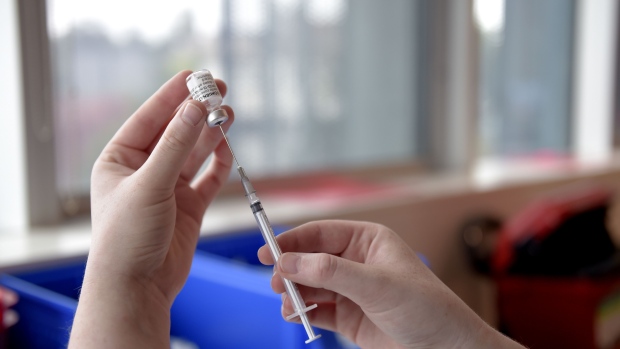 A nurse fills a syringe with a dose of the Pfizer-BioNTech Covid-19 vaccine at the vaccination clinic at Austin Hospital in Melbourne, Australia, on Monday, Feb. 22, 2021. Australia's Covid-19 vaccination program started on Sunday, with Prime Minister Scott Morrison joining a group of nursing home residents and staff in receiving the first shots. Photographer: Carla Gottgens/Bloomberg , Bloomberg

Final recommendations from the Australian Technical Advisory Group on Immunisation are expected in the coming weeks, and the program will be timed to provide at least one dose to the kids ahead of the new school year in 2022, Hunt said.

After a slow start, Australia ramped up its vaccination program in the second half of 2021 to end months-long lockdowns of the nation’s two most populous cities as they combated a surge driven by the delta variant. About 93% of Australians aged 16 and over have had at least one dose of the vaccine, while about 77% of those aged 12-15 have had their first shot, Hunt said.

Australia has a deal in place to receive enough of Pfizer’s pediatric vaccine for the entire cohort, with the first shipment expected in early January, he said.