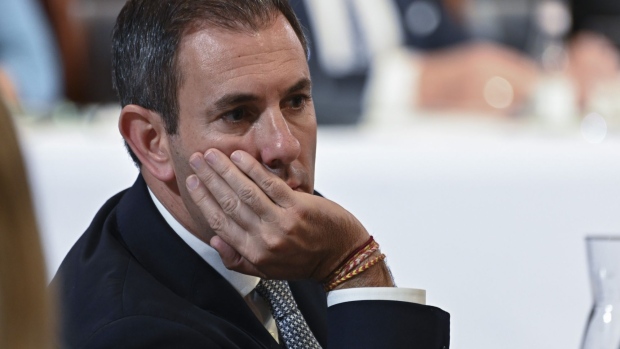 (Bloomberg) -- Australian Treasurer Jim Chalmers said he expects meetings later this month in Washington with Federal Reserve Chairman Jerome Powell and other financial leaders will help inform decisions in the budget he is due to deliver Oct. 25, Sky News reported.

“It’s a really valuable opportunity to confer with my counterparts,” Chalmers said in Brisbane in an interview with Sky News, referring to the G-20 meetings of finance ministers and central bankers set for Oct. 12. “I’ll be meeting with the Chair of the US Federal Reserve and others from around the world to make sure our Budget is informed by the most recent, most candid assessment of what’s going on in the global economy.”

Chalmers reiterated his position that the government’s first budget since it won election in May will seek to strengthen Australia’s fiscal position. He again signaled a bias to restrain spending even after the Treasury reported a smaller-than-expected deficit in the fiscal year ended June 30, as Russia’s war on Ukraine drove up commodity prices and bolstered the nation’s bottom line.

The new government has been buffeted by accelerating inflation that prompted the Reserve Bank of Australia to hike interest rates by 2.25 percentage points since May. It is expected to add another half a point on Tuesday to those increases. Chalmers said he was conscious of the need to avoid clashing with that policy stance in crafting a budget that aims to help households cope with soaring consumer prices but avoid adding to inflationary drivers by overheating the economy.

“We expect our inflation challenge to get a bit worse before it gets better, but it will get better,” Chalmers said, adding a key task of the budget “will be providing that cost of living relief in a way that provides an economic dividend and doesn’t make the job of the independent Reserve Bank that much harder.”

Chalmers also said that the past week’s events in the wake of the UK’s mini-budget stand as a warning about the need to take care to align government and central bank policy.

“Even in the last month or two the global situation has deteriorated dramatically and in many of the major economies that we monitor the chances of a recession have edged over from possible to probable,” he said. The UK offers “a cautionary tale about the costs and consequences of getting government policy and central bank policy out of whack.”