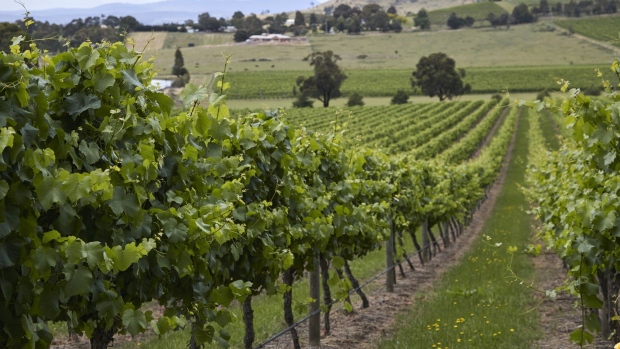 Fifth-generation winemaker Stephen Henschke, managing director of Henschke Cellars Pty, right, and his son Johann Henschke, winemaker and ambassador, check glasses of fermenting Henschke Hill of Grace 2018 shiraz at the winemaker's Cellar Door and Winery in Eden Valley, South Australia, Australia, on Tuesday, April 3, 2018. The release of Henschke Hill of Grace 2013 on September 3 marks a significant anniversary for the Henschke family. They and their forbears have been growing vines on the Hill of Grace in the Eden Valley region of South Australia for 150 years and their Shiraz wines have acquired the status of collectibles with prices to match, selling for up to $500 a bottle. Photographer: Carla Gottgens/Bloomberg , Bloomberg

(Bloomberg) -- Australia has warned that Chinese tariffs on bottled wine exports could cost the industry at least A$2.4 billion ($1.8 billion) over the five years through 2025 if there are no efforts to expand in other markets.

Chinese imports of Australian wine will “cease entirely” as a result of crippling anti-dumping duties imposed by Beijing last year, according to government forecaster Abares. The move, which effectively shut down access to the industry’s biggest market, will see export values in 2025 plunge by A$480 million if the sector doesn’t grow trade with other countries, it said Tuesday.

The tariffs highlighted the need for the A$3 billion export industry to foster new trade destinations, but attempts to grow relationships of a sufficient scale to fill the void left by China will require different strategies, Abares executive director Jared Greenville said. Without such a change, only 60% of wine destined for China will find a place in other existing markets by 2025, he said.

“This isn’t to spell doom and gloom,” Greenville said. “It’s an outcome that can be avoided if we look at finding other markets for Australian wine or find ways to generate more value from our wine sold into existing markets.”

Other points in release: