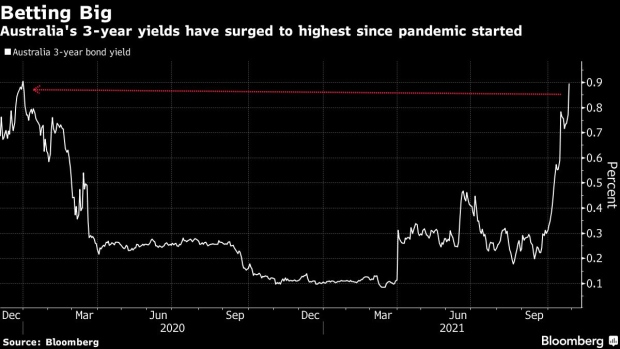 Yields rose as much as 14 basis points to 0.91% after trimmed mean inflation for the third quarter -- a core measure which feeds into central bank policy -- rose 2.1% versus a year ago, above economist estimates of a 1.8% rise. Headline inflation rose 3% from a year earlier, below economists’ forecasts for a 3.1% rise.

A quickening inflation is seen bolstering bets for an earlier policy tightening by the Reserve Bank of Australia. Traders have so far priced in two quarter-point hikes by end-2022, even as the central bank doesn’t see conditions for tightening to be met by 2024.

The latest economic indicator is also likely to revive the debate on whether inflationary pressures in the global economy are here to stay.

Australia’s bond yields have been on the rise since late September, tracking Treasuries, after Federal Reserve Chair Jerome Powell said the central bank could start scaling back its bond purchases as soon as November.

The upward pressure on Aussie yields has also come from expectations of a growth rebound, after the nation’s state governments announced the end to long-standing lockdowns in the nation’s two-largest cities. The federal government has committed to reopen the country to international travelers.

The surge in yields forced the RBA back to defend its 0.1% bond-yield target Friday, for the first time in eight months, raising doubts on potential central bank tightening.