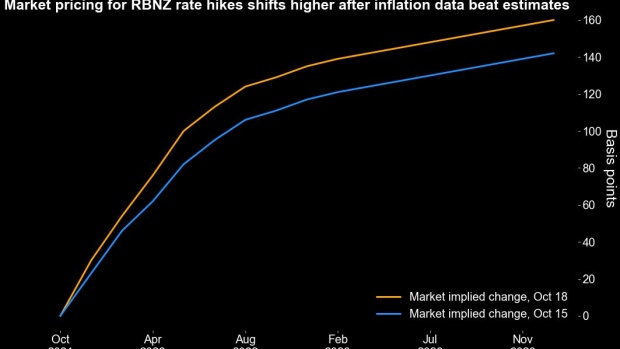 “The global theme is that higher inflation will likely be less transitory than earlier expected amid elevated commodity prices,” said Andrew Ticehurst, a rates strategist at Nomura Holdings Inc. in Sydney. “Strong U.S. retail sales data on Friday and much stronger-than-expected third-quarter CPI data in New Zealand this morning are encouraging this trend.”

New Zealand overnight-indexed swaps signaled a 20% chance the central bank will raise its official cash rate by 50 basis points at its November meeting, compared with odds of 92% on Friday for a 25 basis-point increase. Consumer prices in the country jumped 4.9% in the third quarter from a year earlier, the government said Monday, exceeding the median forecast of economists of 4.2%.

“For me, it’s more about the brute strength of the upside surprise to the headline data rather then the details even though they too were strong,” said David Croy, a senior strategist at Australia & New Zealand Banking Group Ltd. in Wellington. “This speaks to more hikes and a higher terminal OCR, and to the extent that the RBNZ is more likely to hike to keep inflation expectations well-anchored.”

Australian yields also climbed as vaccination rates rise and the authorities start to remove movement restrictions in many parts of the country. The nation’s second most populous city Melbourne will end its months-long lockdown on Thursday night.

Increasing vaccination rates and progressive re-opening are contributing to the rise in yields, Nomura’s Ticehurst said. The global inflation theme “is also leading to significant adjustments in positioning, with investors stopping out of long positions” and commodity trading advisors and system traders initiating and adding to short positions, he said.