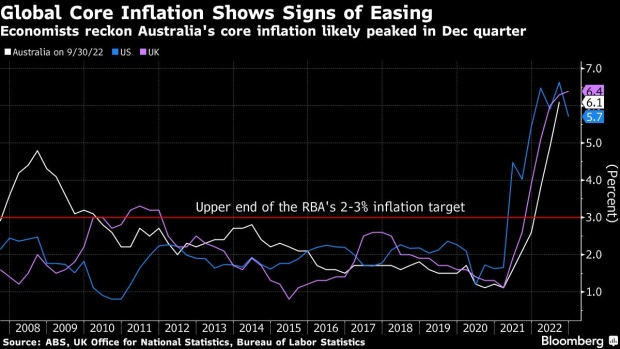 (Bloomberg) -- Australian business conditions eased for a third consecutive month as trading, profitability and employment all weakened in response to a series of interest-rate increases.

“The falls were significant and occurred in every sector,” said Alan Oster, chief economist at NAB. “Growth momentum has slowed significantly in late 2022 while price and purchase cost pressures have probably peaked.”

Leading indicators were softer too with forward orders edging down 2 points and capacity utilization also slipping. Price and cost growth slowed while still remaining elevated, according to the survey.

The report follows a separate survey this month that showed consumer sentiment remained in deeply pessimistic territory as the Reserve Bank’s 3 percentage points of rate hikes between May and December crimped household income. The central bank holds its first meeting of the year on Feb. 7.

Consumer and business sentiment are beginning to converge after an extended split while the RBA delivered it sharpest tightening cycle in 33 years to contain inflation. Firms remained positive for a period even as rising cost of living pressures and higher mortgage repayments hurt consumers.

“Price pressures are still evident,” Oster added. “That said, we know the full impact of rates is yet to fully flow through so the survey should give us an indication of the accelerating impact from rates over coming months.”

Australian consumer-price growth likely peaked last quarter at 7.6% and inflation is expected to begin easing this year. Fourth-quarter data will be released on Wednesday.