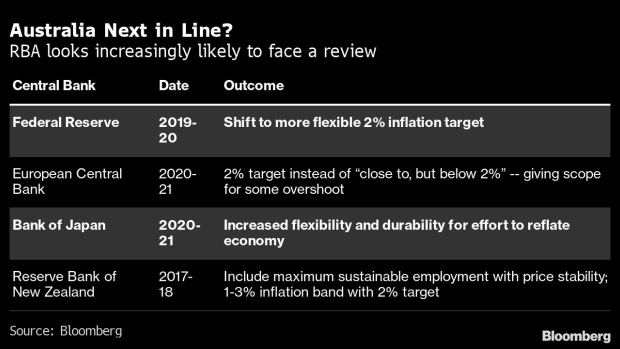 (Bloomberg) -- The Reserve Bank of Australia is facing building pressure to launch the type of formal review that has already been conducted at central banks across the globe from Washington to Wellington.

Treasurer Josh Frydenberg last week fueled long-running talk of the need to reexamine the RBA’s policy-making setup by saying he could see the case for a review. His remarks follow a recent OECD report urging a review of Australia’s monetary policy framework.

While central bank Governor Philip Lowe has repeatedly played down the need for any kind of inquiry, he finds himself in a vulnerable position as he has struggled to lift inflation to even the lower end of the RBA’s 2-3% target since taking the helm in 2016.

Lowe is due to speak at a conference on central bank independence, mandates and policies early Friday Sydney time, offering him a timely opportunity to set out his thinking on the responsibilities and limitations of monetary authorities including the RBA.

Central banks worldwide have found themselves repeatedly falling short of their existing mandates while at the same time facing growing demands to expand their remits to address issues ranging from climate change to inequality.

Reviews at the Federal Reserve and the European Central Bank explored their approaches to inflation, resulting in more scope for them to allow prices to run beyond targets. In trying to push back against talk of a review, Lowe has said major central banks have moved toward more flexible inflation targets, like Australia’s.

But the debate over a review goes beyond inflation goals or whether the RBA’s target band is too high.

Most economists, academics and past RBA board members expect a review would focus on the board’s structure and a call to include more monetary policy experts. The basic argument is that the current framework was set up in the early-to-mid 1990s when the economy faced very different challenges.

“Most of the shocks that are going to be coming to Australia are going to be supply shocks from climate change and restructuring the economy for climate reasons,” said Warwick McKibbin, a board member from 2001-11 who backs a review. “It doesn’t really make sense to stick to what worked since 1993.”

One risk of an inquiry is that other demands could be made of the bank.

The Reserve Bank of New Zealand underwent a review that added a maximum sustainable employment to its price stability mandate.

“There was certainly the risk of influence from the government,”said Christina Leung at the New Zealand Institute of Economic Research, on employment being added. “There was a lot of discussion around what that meant in terms of how the Reserve Bank would respond” to changes in the economy.

One criticism of the RBA has been insularity at the top. Outside of Bernie Fraser, who served from 1989-1996, set up the inflation target and came from Treasury, every modern governor has come from within the institution.

There’s also a lack of policy expertise among the six independent board directors, with only one having an economics background. That leaves them poorly equipped to push back against staff modeling and the governor and deputy governor. The treasury secretary, who completes the nine-member panel, has a large staff to draw from.

The RBA declined to comment on a potential review and pointed to Lowe’s comments in parliamentary testimony.

On the independent directors, Lowe argues business people are well qualified to discuss policy given their experience of taking forward-looking decisions in an uncertain environment.

With fiscal and monetary authorities grappling with the pandemic’s fallout and an election due by May, any inquiry is unlikely to occur before the second half of 2022 at the earliest. Still, there’s a growing sense of its inevitability.

Frydenberg’s signal that he was open to a review came after the opposition Labor party earlier this year backed an inquiry, meaning it has bipartisan support.

“You can look around the globe and see international best practices like a more diverse board with more offshore monetary policy experience,” said Su-Lin Ong, head of Australian economic and fixed-income strategy at Royal Bank of Canada, noting the large passage of time since the last review. “It’s been a long time.”