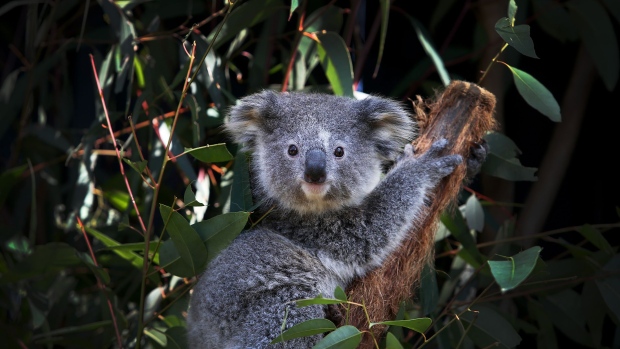 PORT MACQUARIE, AUSTRALIA - AUGUST 27: A young female koala fondly named 'Ash' is seen sitting on a Eucalyptus branch following a general health check at the Australian Reptile Park on August 27, 2020 on the Central Coast in Sydney, Australia. Dean Reid, Head Mammal and Bird Keeper oversees the Australian Reptile Park's koala breeding program which currently has a record number of 38 koalas, including 9 joeys. A New South Wales parliamentary inquiry released in June 2020 has found that koalas will become extinct in the state before 2050 without urgent government intervention. Making 42 recommendations, the inquiry found that climate change is compounding the severity and impact of other threats, such as drought and bushfire, which is drastically impacting koala populations by affecting the quality of their food and habitat. The plight of the koala received global attention in the wake of Australia's devastating bushfire season which saw tens of thousands of animals killed around the country. While recent fires compounded the koala's loss of habitat, the future of the species in NSW is also threatened by continued logging, mining, land clearing, and urban development. Along with advising agencies work together to create a standard method for surveying koala populations, the inquiry also recommended setting aside protected habitat, the ruling out of further opening up of old-growth state forest for logging and the establishment of a well-resourced network of wildlife hospitals in key areas of the state staffed by suitably qualified personnel and veterinarians. The NSW Government has committed to a $44.7 million koala strategy, the largest financial commitment to protecting koalas in the state's history. (Photo by Lisa Maree Williams/Getty Images) , Photographer: Lisa Maree Williams/Getty Images AsiaPac

Lendlease wants to develop 4,000 houses at Gilead and was told by New South Wales state officials to take steps to protect the colony, including providing koala corridors, the ABC reported. Australian Ethical said it is impossible to determine from project plans whether those directives have been followed, according to the report.

The fund said the project in its current form is not transparent about how it will protect koala habitats, and it would have to divest if Lendlease proceeds, the ABC reported, citing ethical stewardship lead Amanda Richman.

Lendlease has fully adhered to the state’s requirements, and has had the koala corridor plans independently assessed as meeting the recommendations, the ABC said, citing a company spokesperson.