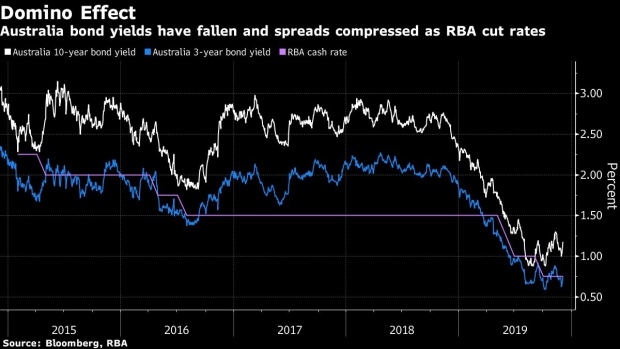 (Bloomberg) -- Australian asset managers are gearing up for what was once unthinkable: the prospect of quantitative easing in their own backyard.

They’ve pored over the lessons from overseas and arrived at a different conclusion to central bank chief Philip Lowe, who has sought to damp expectations that QE is likely in Australia.

Some including QIC Ltd. and Nikko Asset Management Ltd. are already buying assets on bets that interest-rate cuts won’t be enough to combat slowing economic growth. They see the impact of asset purchases rippling broadly through debt markets, even if Lowe manages to limit any QE program to government bonds.

“QE could come even before any recession,” said Susan Buckley, QIC’s managing director for global liquid strategies, who is overweight Australian credit. Unorthodox monetary policy “is definitely a scenario we have to prepare for. Everyone’s talking about QE.”

The Reserve Bank of Australia has cut interest rates three times since June, to a record low 0.75%, amid a slide in economic growth to the slowest pace in a decade.

Lowe has said in a speech on Nov. 26 that rates would need to go to 0.25% before he’d consider QE, and that even then, the hurdle to asset purchases would be high. He also signaled that the RBA would have little appetite for buying private-sector assets.

But with unemployment that’s too high to drive up wages and tepid gains in consumer prices, investors expect Lowe to be pushed outside his comfort zone. Many of them were right in positioning for the recent run of rate cuts. The RBA stood pat on Tuesday.

“Look across the developed world and if you can show me a country that’s averaged 2.5% inflation over the past 10 years then you’re doing a better job than me,” said Chris Rands, portfolio manager at Nikko Asset, who is loading up on semi-government bonds. “Why would Australia be the country that achieves that when no one else has?”

Here’s how some fund managers are preparing for QE:

Australian sovereign bond yields are likely to fall across the curve as the RBA steps in as a default purchaser, said Raymond Lee, money manager at Kapstream Capital, a unit of Janus Henderson Investors. That makes government bonds a fairly compelling buy for the A$14 billion ($9.6 billion) fund.

“We’ve increased our duration at the beginning of this year, just because we felt that rates were going to stay lower for longer,” said Sydney-based Lee. While QE might still be “a while away, RBA comments on unconventional policy only confirms the fact that rates are going to stay low and could rally further.”

The central bank may buy up to A$50 billion of Australian government bonds as part of a QE package as early as next year, according to JPMorgan Chase & Co.

It’s been a profitable trade. Yield spreads of quasi-government debt have narrowed against their sovereign counterparts.

“We can look at the U.S. experience for this, where even though they bought government bonds there, other assets all got supported,” Rands said. “It’s likely to be the same in Australia, as QE gives semis an extra kick.”

“We have increased our exposures by buying semi-government bonds and residential mortgage-backed securities,” he said. “This buying came ahead of Lowe’s speech, which has broadly affirmed our views.”

Others including QIC’s Buckley see Australian corporate bonds gaining, even if the RBA’s initial focus is on government debt.

She sees unconventional stimulus as likely to “float all boats.”

On top of this, the RBA could run out of sovereign bonds to buy. Lowe himself has noted that the gross stock of government debt is projected to decline over the years ahead.

While rising risks of a recession or economic slowdown would normally see the A$85 billion money manager shed some of its credit exposure, Brisbane-based QIC is taking a new tack.

“We’ve seen this play out in the U.K., Europe where spreads have compressed as a result of ECB purchases, and it could happen here as investors push out the credit spectrum as risk-free rates fall,” Buckley said.

For those scouting for a more liquid way to trade Aussie QE, shorting the nation’s currency presents the best avenue, said Stephen Miller, adviser at GSFM, a unit of Canada’s CI Financial Group.

“If QE is coming, the Australian dollar will look sick and likely get sicker,” Sydney-based Miller said. “It’s a good short if you’re looking to war game quantitative easing, and right now, I’d say a target of around 65 U.S. cents is achievable.”

The Aussie has weakened about 3% against the greenback this year and touched a decade-low of 66.71 U.S. cents in October as traders priced in fresh interest-rate cuts.

The nation’s biggest pension fund, AustralianSuper Pty., is underweight the Aussie and long sovereign paper on bets the RBA may unleash QE as early as next year.

The central bank is likely to push rates to as close as zero as they think they can without damaging the banking system, according to Carl Astorri, head of asset allocation and research at the A$175 billion fund. “That process would flatten the yield curve and push the currency down,” he said.

To be sure, no market participant can say for certain when and how QE will finally be deployed.

For some, it’s still better to be safe than sorry.

“There are several steps before the RBA gets to QE, but if they need to act further down the track, they likely will,” said GSFM’s Miller. “I’m not surprised some think now might be the time to start buying assets.”

To contact the editors responsible for this story: Tan Hwee Ann at hatan@bloomberg.net, Brett Miller