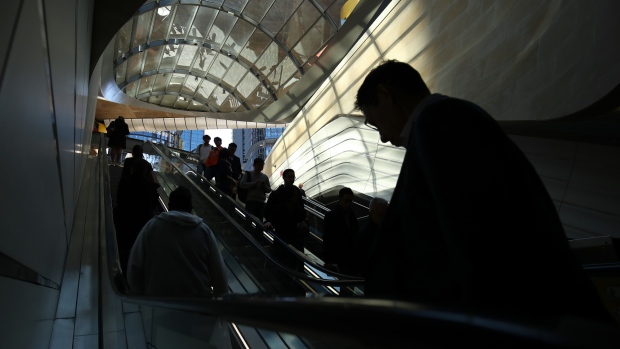 Commuters ride escalators as they go through the Wynyard Walk pedestrian tunnel at Wynyard railway station in Sydney, Australia, on Monday, July 30, 2018. The nation, whose fiscal year ends on June 30, just marked its 27th year without a recession. , Bloomberg

(Bloomberg) -- Australia’s central bank is holding fire on interest rates, even as a slide in the nation’s home prices deepens, as it awaits a resolution to the divergence between strong hiring and decelerating economic growth.

The Reserve Bank said the labor market is “particularly important” to the outlook and reiterated there’s considerable uncertainty over consumption, minutes of its March 5 policy meeting released in Sydney Tuesday showed. It said dwelling investment was expected to subtract from growth and the decline “could be sharper” than currently expected.

“Members agreed that there was not a strong case for a near-term adjustment in monetary policy,” it said. “Rather, they assessed that it would be appropriate to hold the cash rate steady while new information became available that could help resolve the current tensions in the domestic economic data.”

The RBA has shifted to a neutral policy stance as tumbling property prices weigh on household spending and damp growth. The weighted average of home prices across the nation’s eight capital cities fell 2.4 percent in the final three months of 2018 from the preceding quarter, equating to a 5.1 percent decline from a year earlier.

The central bank is trying to reconcile the economy’s slowdown with strong job gains and falling unemployment, as well as liaison with firms that signal a healthy employment outlook. The RBA noted this discrepancy is visible in several other developed economies.

The Australian dollar traded at 71 U.S. cents at 11:54 a.m. in Sydney, little changed from before the minutes and home price data were released.

The board met a day before the release of GDP data showing the economy decelerated in the second half of the year to an annualized 1 percent from almost 4 percent in the first half. The RBA has kept rates on hold for 2-1/2 years as it aims to boost employment, lift wages and reignite inflation.

The board noted in the minutes that “while the labor market had continued to strengthen, less progress had been made on inflation.”

The minutes reiterated that leading indicators suggested jobs growth was likely to remain “above average,” while noting some measures “had turned down a little recently.”

While the RBA said a trough in mining investment is near and spending is set to resume, Western Australia, the epicenter of the commodities boom, is struggling. State unemployment has climbed to around 6.5 percent there vs 5 percent nationally, and wage-growth is 1.6 percent vs 2.3 percent for the country.

Policy makers noted the global economy had cooled in the second half of 2018 and this had continued into 2019. However, they were unable to read too much further into the picture as the U.S. government shutdown and Chinese New Year holiday had impacted the timing of data releases.

On the U.S.-China trade war, the RBA said there had been “spillover effects” on some other economies: a decline in Chinese imports to meet domestic demand and facilitate export production in east Asia; an easing in intra-regional export growth; and survey measures of new exports orders in east Asia had “declined sharply” to be below average early in 2019.

To contact the editors responsible for this story: Nasreen Seria at nseria@bloomberg.net, Victoria Batchelor, Malcolm Scott