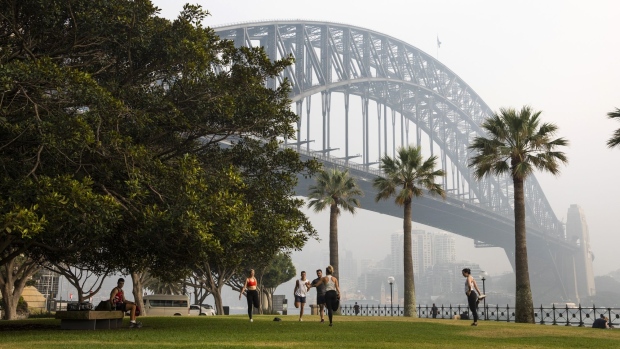 People stretch at a park as the Sydney Harbour Bridge is shrouded in haze in Sydney, New South Wales, Australia, on Wednesday, Jan. 8, 2020. As Sydney faced another day of toxic haze shrouding the skyline, U.S. weather satellite captured the smoke crossing South America and spreading out over Buenos Aires before it drifted into the Atlantic Ocean -- some 7,328 miles (11,793 kilometers) east of Sydney -- according to the National Oceanic and Atmospheric Administration. Photographer: Brent Lewin/Bloomberg , Bloomberg

One of Australia’s largest investment firms expects to see more demand for assets in its home market in the coming year as the coronavirus pandemic slows the recent wave of money flowing out of the country.

IFM Investors Pty., a A$156 billion fund ($104 billion) owned by 27 of Australia’s largest not-for-profit retirement firms, is seeing appetite among its clients for local infrastructure projects, Chief Executive Officer David Neal said. The firm is considering raising new capital to lend to struggling companies and will consider being a cornerstone investor in future capital raisings by Australian-listed companies.

“The Australian funds are likely to be more attracted to domestic Australian assets than they have been before,” Neal, 50, said in a phone interview from Melbourne. “There’s capital ready to be deployed into good investment opportunities as we come out of the other side.”

Favoring local assets would mark a shift in strategy for the nation’s A$2.7 trillion pension pool -- the world’s fourth largest -- that’s been sending more money offshore in recent years as it outgrew the local market and investment opportunities dried up. It’s an opportune time as the government weighs new spending, with the economy on the brink of its first recession in almost 30 years.

Neal, who’s been at the helm of the Melbourne-based firm for about two months after leading Australia’s sovereign wealth fund for nearly six years, said the government should tap private capital to help spur an economic rebound. IFM’s proposal to build a rail link between Melbourne’s airport and the city center is still under consideration by the government, he said. The fund would consider buying any future privatized state assets under the so-called asset recycling program, he said.

“We want to be part of ‘Team Australia’,” he said, invoking the slogan of Prime Minister Scott Morrison. Pension funds “want to participate in helping Australia recover.”