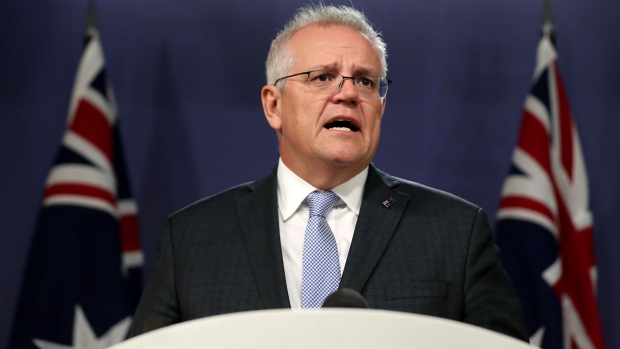 Scott Morrison, Australia's prime minister, speaks during a news conference in Sydney, Australia, on Friday, May 7, 2021. For Morrison, Tuesday’s annual budget can’t come soon enough as he tries to put a torrid opening to the year behind him and focus voter attention on the strength of the economic recovery. , Bloomberg

(Bloomberg) -- The popular Chinese messaging application WeChat appears to have blocked access to Australian Prime Minister Scott Morrison’s account, leading one senator to call for a parliament-wide boycott of the service.

Senator James Paterson, chair of the Parliamentary Joint Committee on Intelligence and Security, said on Monday the prime minister’s team had been having trouble accessing the WeChat account for months. It was finally taken out of the government’s control in early January despite formal representations from Morrison’s office, he told radio station 4BC.

“My view is given that WeChat is such a closely controlled company by the Chinese Communist Party, that this amounts to foreign interference in our democracy and in an election year no less,” he said.

The prime minister’s office had no immediate comment on Monday. Efforts to find Scott Morrison’s WeChat account on Monday morning in China were unsuccessful.

With more than a billion users globally, WeChat is one of the most popular messaging applications in the world. Owned by parent company Tencent Holdings Ltd., China’s government regularly censors sensitive content.

A Tencent spokesperson didn’t immediately respond to a request for comment.

Many Australian politicians, including opposition Labor Party leader Anthony Albanese, have WeChat accounts posting in Mandarin in an attempt to reach out to China’s large diaspora. In the 2016 census, about 5.6% of the population said they had Chinese ancestry -- more than one in 20 citizens.

Paterson called for all Australian politicians to stop using WeChat until the prime minister’s account was restored.

“No one should be legitimizing their censorship and their control over our public debate,” he said.

In comments to 4BC, Albanese said he would talk with Morrison over the WeChat incident, adding that it could have “national security implications.”

Former diplomat Dave Sharma, who is now a lawmaker in Morrison’s coalition, told Sky News the decision to block access to the prime minister’s account was “more likely than not state-sanctioned.”

“It shows the attitude towards free speech and freedom of expression that comes out of Beijing,” he said.