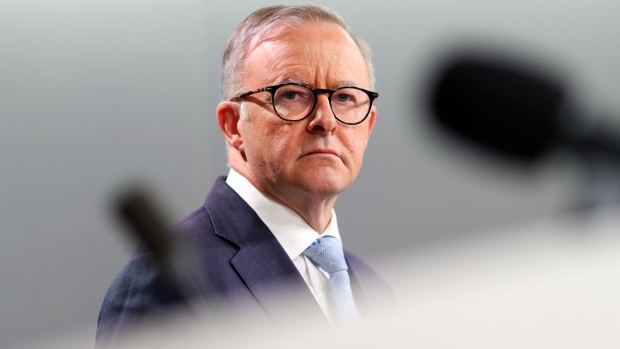 (Bloomberg) -- Australian Prime Minister Anthony Albanese has promised a “new dawn” in relations with France after arriving in Paris for a meeting to repair relations damaged over the unexpected cancellation of a billion-dollar submarine contract in 2021.

Holding a press conference after he touched down in Paris on Thursday, Albanese said he would be meeting French President Emmanuel Macron on Friday to emphasize that both governments “can trust each other and mutually benefit” from building a strong relationship.

“I think tomorrow, on the 1st of July, is an appropriate time with the new year to enter a new dawn and a new arrangement between Australia and France,” he told reporters.

Relations between the nations deteriorated in September 2021 after Australia announced unexpectedly it would be abandoning a billion-dollar submarine contract with the French in favor of a new deal with the US and the UK, known as Aukus. Under the Aukus agreement, Australia would be supplied with a fleet of superior nuclear submarines, negating the need for the French vessels.

Macron claimed his government had not been consulted on the arrangement and accused then Australian Prime Minister Scott Morrison of lying to him. The relationship deteriorated further after text message exchanges between Macron and Morrison were leaked to an Australian newspaper.

Albanese has moved quickly to repair relations with France after defeating Morrison in an election held in May, emphasizing the importance of the relationship with Paris both as a trading partner and as an ally in the Pacific. Macron reached out to Albanese in the wake of the new leader’s victory and the two struck a compensation deal with France worth 550 million euros ($575 million).

When asked by reporters whether he would be apologizing on behalf of Australia, Albanese said he would be keeping his conversations with Macron “private.”

“I’ll deal with Mr Macron in a professional and a courteous way. And our private discussions will stay private,” he said.