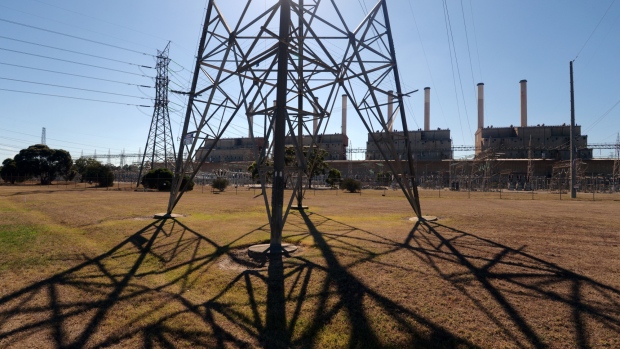 An electricity pylon stands in front of the decommissioned Hazelwood Power Station in the Latrobe Valley, Australia, on Saturday, Feb. 23, 2019. Australian Prime Minister Scott Morrison is pledging A$2 billion ($1.4 billion) over the next 10 years in direct action to lower greenhouse gas emissions, making a climate pitch to voters ahead of elections due by May. , Bloomberg

(Bloomberg) -- Australia’s government is making its second attempt to pass legislation that could force energy companies to break up if they engage in anti-competitive conduct.

Prime Minister Scott Morrison has labeled the proposed law a “big stick” against firms that use market concentration to hike up electricity prices. Under the proposal, the Federal Court could order power companies to sell off assets on the recommendation of the competition watchdog.

“The government has long warned that energy companies must put their customers first,” Treasurer Josh Frydenberg said in a statement earlier this week. “That is why the government is committed to passing our ‘big stick’ legislation.”

Australia has struggled in recent years with spiraling power prices and regional grid instability as aging coal plants close and successive governments have fumbled a transition to renewable energy.

A previous attempt to pass similar legislation failed amid opposition from business and energy groups, though the government is claiming a mandate after promoting it as policy during its successful re-election campaign in May. It’s unclear whether the bill, which was reintroduced Wednesday, has enough support from rival lawmakers to pass parliament.

Business groups have spoken out against the move saying it could deter investment and say the legislation is at odds with the conservative government’s traditional reputation as a supporter of big business.

“We need investment in new parts of the energy market,” Jennifer Westacott, chief executive of the Business Council of Australia, saidin a radio interview on Tuesday. “We think it will deter it. We think it is a highly risky piece of legislation and we think it’s unnecessary.”

It’s not the first time the Liberal-National coalition has sought to intervene in the power market to drive down prices. Under rules in place since July 2017, the government can force producers to divert gas to the domestic market if there is a shortfall.

To contact the editors responsible for this story: Ruth Pollard at rpollard2@bloomberg.net, Edward Johnson