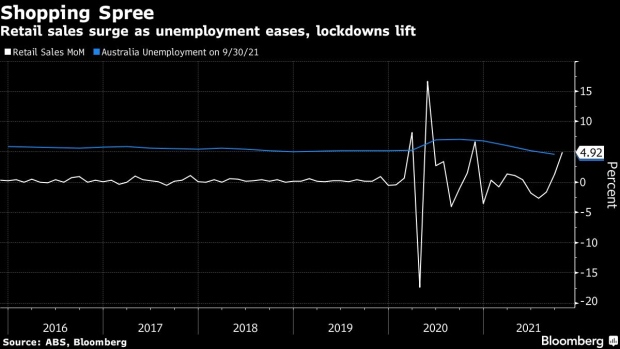 (Bloomberg) -- Australian retailers recorded their best month of sales in nearly a year as consumers splashed out on everything from dining out to clothing, taking advantage of the easing of protracted lockdowns and building momentum in the economy for the final quarter.

Sales surged 4.9% in October from a month earlier, when they rose 1.3%, and more than doubled economists’ forecast of a 2.2% gain, Australian Bureau of Statistics data showed Friday. That was the biggest rise since November 2020.

“Australians coming out of lockdown have well and truly hit the pavement, ditching the loungewear, refreshing their wardrobe and heading out to enjoy cafes and restaurants,” said Jo Masters, chief economist at Ernst & Young LLP. The result “is yet another sign that the economy is roaring back,” she said.

Strong consumer spending, together with high job vacancies and firms boosting investment intentions help explain why markets believe the Reserve Bank’s first interest-rate increase is only a matter of months away. Traders are pricing in an initial 15 basis-point hike to take the cash rate to 0.25% in May and then at least two more quarter-point increases over the rest of 2022.

The central bank is also optimistic about the outlook for the A$2 trillion ($1.4 trillion) economy, predicting a brisk 5.5% expansion next year. But it sees price pressures taking longer to build, with core inflation only expected to reach the 2.5% midpoint of the RBA’s target in late-2023.

That’s a key reason why Governor Philip Lowe has repeatedly dismissed aggressive market pricing and signaled the tightening cycle is only likely to begin in about two years’ time.

“It looks like a sharp rebound is unfolding in the fourth quarter,”  said Andrew Ticehurst, a rates strategist at Nomura Holdings Inc. in Sydney. He reiterated his view that the RBA’s first rate hike will come in November 2022, while bringing forward his expectation on the timing of the central bank ending quantitative easing to May from August previously.

The RBA will review its bond buying program -- currently running at A$4 billion a week -- at its Feb. 1 meeting.

Some economists see the potential for the bank to scrap the program altogether in February, particularly with the Federal Reserve expected to begin scaling back its asset purchases at a faster pace as it contends with escalating U.S. inflation.

Consumer spending accounts for a little over half of Australia’s annual economic output and as a result it is an important indicator for policy makers.