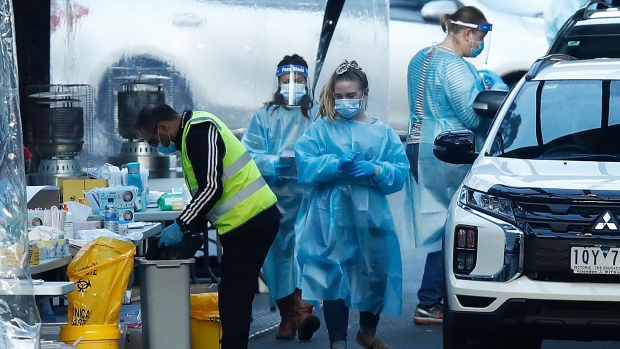 MELBOURNE, AUSTRALIA - JUNE 24: COVID-19 testing staff are seen at a pop-up site at Keilor Community Hub on June 24, 2020 in Melbourne, Australia. A man in his 80s died overnight in Victoria from coronavirus, bringing the total number of deaths in the state to 20. The death is the first COVID-19 fatality for Victoria in many weeks and also comes as 20 new coronavirus cases were confirmed today. Victorian Premier Daniel Andrews on Tuesday warned of another possible lockdown should cases continue to rise, and has extended the state of emergency for at least four weeks to allow police the power to enforce social distancing rules. (Photo by Daniel Pockett/Getty Images) , Photographer: Daniel Pockett/Getty Images AsiaPac

Australia’s second-most populous state is imposing a four-week lockdown across areas of Melbourne in an attempt to contain a spike in coronavirus infections.

From late Wednesday night, people across 10 areas will face fines if they leave their homes other than for work or school, for care or care-giving, for daily exercise, or to buy food and other essentials, state Premier Daniel Andrews told reporters.

The state has requested that all flights to Melbourne be diverted to other cities for two weeks as a precaution.

While Australia has been one of the stand-out performers globally in limiting the spread of the virus to less than 8,000, Victoria’s flare-up -- mainly amid Melbourne’s poorer and more multicultural suburbs -- shows just how it will be hard to eradicate without a vaccine.

The resurgence in Victoria is in stark contrast to the nation’s other seven states and territories, some of which have gone for weeks without recording community transmissions.

Queensland state announced Tuesday that while it will reopen its borders to other states on July 10, people who have been to Victoria will be barred unless they undertake 14 days of hotel quarantine at their own expense. South Australia will also remain closed to Victorians.

Virus Hotspot State Faces Isolation From Much of Australia

Government grants will be awarded to Victorian businesses forced to close during the lockdown.

Victoria recorded 64 new cases on Tuesday from the day before -- at least the 14th consecutive day of double-digit increases, though down from Monday’s total of 75.