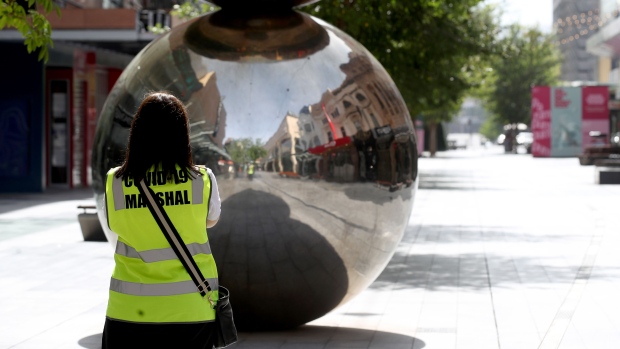 ADELAIDE, AUSTRALIA - NOVEMBER 20: A Rundle Mall Covid Marshall in Rundle Mall on November 20, 2020 in Adelaide, Australia. South Australian premier Steven Marshall has imposed lockdown restrictions across the state for six days as health authorities work to contain an outbreak of COVID-19 in the community. The new restrictions came into effect at 12:01 on Thursday 19 November, with all South Australians required to stay home for the next six days and only able to leave home for essential purposes. People cannot leave their homes to exercise and only one person per household can visit a supermarket per day. All schools are closed except for children of essential workers and vulnerable children while childcare will be open only to essential workers. Aged care and residential disability care is in lockdown. Takeaway food outlets, restaurants, bars, cafes, pubs and other food venues are closed and non-essential business and industry will shut down while weddings and funerals will be banned for six days. The use of face masks or face coverings outside the home are encouraged but not mandatory. (Photo by Kelly Barnes/Getty Images) , Photographer: Kelly Barnes/Getty Images AsiaPac

(Bloomberg) -- The Australian state that’s been hardest hit by the coronavirus pandemic announced a further easing of restrictions after recording no new infections for 23 consecutive days.

It will no longer be compulsory for people in Victoria to wear masks when outdoors, though it remains mandatory in public indoor venues. The state’s Premier Daniel Andrews announced the new rules that will apply from Monday, just over two weeks after removing a strict three-month lockdown on Melbourne, Australia’s second-largest city.

Other changes include allowing as many as 15 visitors in a household a day, up from two now. That figure will double by Dec. 14, allowing people to plan for a relatively normal Christmas season, Andrews said.

From Monday, larger gatherings will be allowed in churches, recreation and sports centers, pubs, restaurants and cinemas. Offices will be able to implement plans for workers to gradually return.

“Even though these rules are important changes, this virus is not gone,” Andrews told reporters in Melbourne on Sunday. “The key message is, Victorians have done an amazing job and build something that is so, so precious. But it is fragile.”

While community infections in Victoria have been eradicated after reaching a daily peak of about 700 in early August, it’s still feeling the impact of the outbreak. Australia’s government estimated 1,200 jobs were lost a day across the state during the period, and demand for mental health services surged by more than 30%.

The outbreaks in Australia, including in the state of South Australia in the past week, show the challenges in controlling the virus -- even in a nation that has been spared the scale of infections and deaths experienced in Europe and the U.S.

The New South Wales state government announced on Sunday it would remove all border restrictions with neighboring Victoria on Monday after they were in place for three months. Virgin Australia Holdings Ltd. on Sunday said it will ramp up flights from Monday to reconnect Melbourne with other parts of Australia, including with the New South Wales capital city of Sydney.

South Australia recorded one new case on Sunday from the day before -- a traveler who returned from overseas and is in quarantine. On Sunday, the state eased its lockdown restrictions, which had been in place since Thursday and were originally scheduled to run for six days. The cluster has been restricted to 26 cases as of Sunday.

South Australia’s restrictions included a ban on outdoor exercise and dog-walking, after contact tracers said a man had become infected after buying a takeaway pizza. They later established the infected person had misled them and was an employee at the restaurant, where he had been in close contact with another infected worker during several shifts.

The state of 1.7 million people, spread out over a land mass five times the size of the U.K., had largely eradicated community transmission of the virus after a nationwide lockdown earlier this year. The cluster began after a cleaner at a hotel that was used to isolate returning overseas travelers was exposed to the virus.