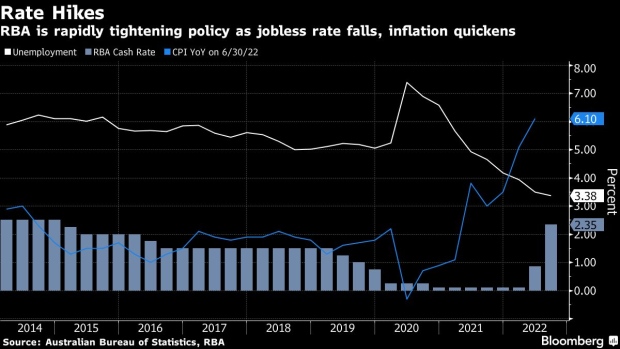 (Bloomberg) -- Australian consumer sentiment jumped to its highest level since May as inflation expectations tumbled, reinforcing the Reserve Bank’s signal on slowing the pace of interest-rate increases.

The RBA hiked by a half-percentage point earlier this month to take the cash rate to 2.35%, from a record-low 0.1% in May, as it joins global counterparts in trying to rein in accelerating inflation. Governor Philip Lowe has signaled a potential reduction in rate-rise increments following four consecutive half-point hikes.

Australian regulators, including the RBA, are closely monitoring consumers’ response to inflation and rates as pressure on household budgets increases. Birch cited ANZ proprietary data showing household spending was solid in the first half of September, including on discretionary goods and services.

The “time to buy a major household item” sub-index, an indicator of retail demand, rose 2.5% for a fourth weekly gain.