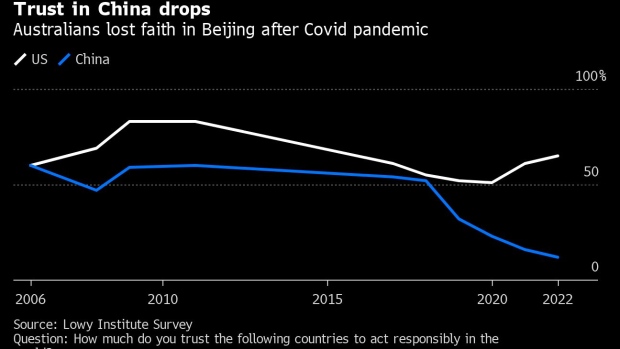 KINMEN COUNTY, TAIWAN - APRIL 19: A boat ferrying passengers between China and Taiwan passes in the distance behind aged anti-landing barricades on a beach facing China on the Taiwanese island of Kinmen which, at points lies only a few miles from China, on April 19, 2018 in Kinmen, Taiwan. China recently carried out live-fire military drills in the Taiwan Strait involving its Liaoning aircraft carrier, an exercise interpreted as a show of force and a message to self-governed Taiwan which China claims as its territory. The naval exercise was the first in the Taiwan Strait since 2016 and was held just over 100 miles off the coast of Taiwan. Following the defeat of the ruling Kuomintang party by the Chinese Communist Party and their retreat to Taiwan in 1949, cross-strait relations have varied from open conflict to diplomatic war. China's President, Xi Jinping, recently emphasised China's sovereignty over Taiwan by stating that 'We have sufficient abilities to thwart any form of Taiwan independence attempts'. Beijing has also imposed financial restrictions by significantly limiting the number of Chinese tour groups allowed to visit Taiwan and imposed trade sanctions on the island. (Photo by Carl Court/Getty Images) , Photographer: Carl Court/Getty Images AsiaPac

(Bloomberg) -- Australians are sharply divided over whether to join any military action to defend Taiwan against a Chinese invasion, despite record-high levels of support for the US alliance and growing unease toward Beijing’s intentions on the world stage.

A new survey released Tuesday night by the Lowy Institute, a foreign policy research group, found only a slim majority of Australians supported military action in the event of a Chinese invasion of Taiwan. Out of those surveyed, 51% said they were in favor of Australia using its military forces to defend Taiwan, while 47% said they were against.

The unease over getting involved in a conflict comes despite record low levels of confidence in the Chinese government in the latest Lowy Institute Poll, a survey examining Australian attitudes to major foreign policy issues and challenges.

Australians’ opinions of China have soured dramatically since the start of the Covid-19 pandemic, with just 12% of those surveyed saying they trust Beijing to act responsibly in global affairs. In 2018, 52% of Australians said they had faith in China.

Attitudes toward international conflicts and the potential for one in the region have changed dramatically as well in recent years. According to Lowy, only 53% of Australians said they felt safe in the face of world events, down from 92% in 2010.

Overall 75% of Australians said they thought it was likely China would become a military threat to their country in the next 20 years, the highest number on record and up from 46% in 2018.

Support for the US alliance is at an all-time high, according to Lowy, with 87% saying the American military was important for Australia’s security. But Australians’ trust in the US has yet to recover from drops in support during the administration of former President Donald Trump. Out of those surveyed, 65% said they trusted the US to do the right thing in international affairs, behind the UK, Japan and France, and down from 83% in 2011.

A majority of respondents said they were also concerned about US interference in Australia’s political processes and 90% said the political instability in America was a critical or important threat to Australia’s future.

If the US decided to enter into a war with China independent of the questions over Taiwan, a majority of Australians said they would choose to remain neutral.