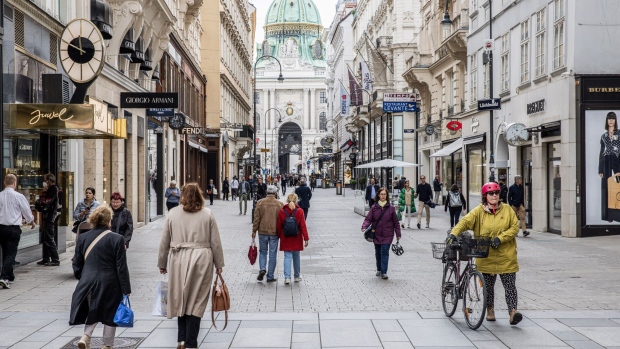 Pedestrians walk down the Kohlmarkt shopping street in Vienna, Austria, on Thursday, May 20, 2021. Western Europe is beginning to loosen restrictions to contain the coronavirus, offering relief for the pandemic-weary region as vaccination programs turn the corner. , Bloomberg

(Bloomberg) -- Austria’s government promised taxpayers as much as 1,000 euros ($1,044) in cash rebates each and further subsidies to help buffer the effects of soaring inflation.

Households and companies will receive 6 billion euros this year and the next in direct benefits, with an added 22 billion euros of help through 2026 in the form of lower taxes. That’s on top of billions of euros already pledged to counteract spiking electricity and natural gas prices.

Chancellor Karl Nehammer announced the new measures on Tuesday amid spreading voter discontent with his conservative People’s Party’s coalition with the Greens. Polls show the government’s popularity suffering as Austrians confront a cost-of-living crisis that’s picked up steam since the onset of the nearby war in Ukraine.

The country’s planned levy on carbon dioxide emissions -- its centerpiece climate reform -- will be delayed until October.

“It’s clear these are extraordinarily difficult times,” said Nehammer. “We’re giving people back the money that inflation took away.”