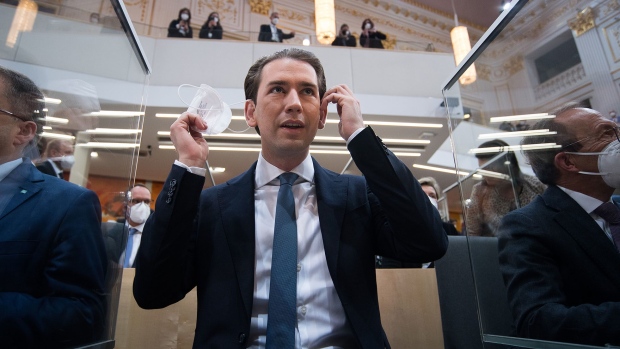 (Bloomberg) -- Austria’s former Chancellor Sebastian Kurz will leave his remaining roles in politics amid an investigation into alleged corruption during his rise to power.

The move marks the downfall of a tumultuous career that saw the erstwhile conservative prodigy become the youngest political leader in Europe and a standard-bearer for the center-right with his brand of polite populism.

Interior Minister Karl Nehammer may take over as chairman of the People’s Party, the Kronen Zeitung newspaper reported without saying where it got the information. The birth of Kurz’s first child over the weekend had convinced him to turn to the exit, the paper said.

The party may also reassess government positions, including a potential change in top government posts, the Kurier newspaper said without citing anyone.

Kurz had moved to a position in parliament, maintaining his roll as party chief, after being forced to resign as chancellor in October. That move was triggered by prosecutors raiding the offices of several close associates.

The 35-year-old faces multiple investigations from state prosecutors, including allegations of false statements made to lawmakers and using public funds to plant forged opinion polls in newspapers to help him rise to power in 2017. He has denied wrongdoing.

His exit may allow the People’s Party to open a new chapter after the corruption probe dented its popularity. It has lost about 10 percentage points of public backing and was overtaken by the Socialists for the first time since 2017.

Kurz will still have close allies in government -- including Alexander Schallenberg, his hand-picked successor as chancellor -- but other conservative leaders have failed to match his talent for dominating the domestic political scene.

The corruption probe continues to reverberate in Austria with prosecutors still investigating thousands of text messages exchanged within his political entourage.