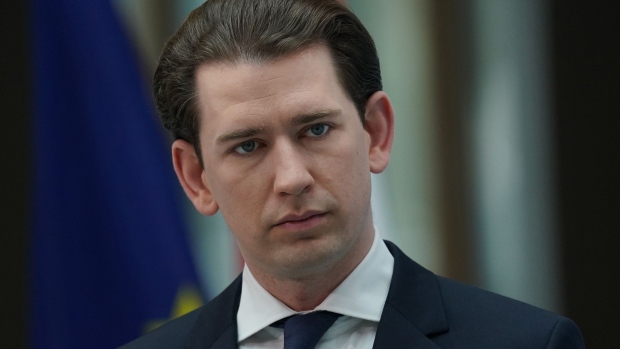 BERLIN, GERMANY - MARCH 19: Austrian Chancellor Sebastian Kurz and Armin Laschet, Premier of North-Rhine Westphalia (not pictured), speak to the media before talks at the state representation of North Rhine-Westphalia on March 19, 2021 in Berlin, Germany. Kurz and Laschet are meeting on the second day of Kurz's visit to Germany. (Photo by Sean Gallup/Getty Images) , Photographer: Sean Gallup/Getty Images Europe

Kurz said he and his chief of staff face potential charges on lying to lawmakers probing the so-called Ibiza affair in 2019 that involved his junior coalition partner. Speaking to reporters before a cabinet meeting on Wednesday, the Austrian chancellor denied wrongdoing and said he wouldn’t step down even if the investigation led to charges.

“I always answered all questions truthfully,” Kurz told reporters in Vienna, adding that he is working under the assumption that Austria’s white-collar crime prosecutors will now investigate.

A spokesman for the prosecutors confirmed the investigation against Kurz but said it was too early to say whether charges would be brought.

Austria’s largest ruling party has been at the center of scrutiny for its handling of the probe into corruption allegations triggered by leaked videos involving members of the far-right Freedom Party. Finance Minister Gernot Bluemel has been criticized by opposition parties for failing to immediately comply with a constitutional court order to hand over a batch of emails.

The government delivered the documents this week after a rare call from the nation’s President to comply with the order. Bluemel said the delay was due to privacy concerns for Finance Ministry workers.