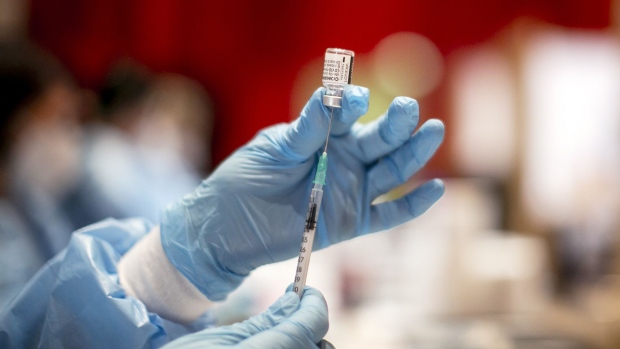 SCHWAZ, AUSTRIA - MARCH 11: A nurse fills syringes with the Pfizer-BioNTech vaccine during a mass vaccination drive at SZentrum on March 11, 2021 in Schwaz, Austria. Over the next five days authorities will offer the vaccine to all eligible adults in Schwaz district as part of a European project to test the effectiveness of the Pfizer-BioNTech vaccine against the South African coronavirus variant, which has become prevalent in the region. The Schwaz district has struggled to contain the spread of the South African mutation, leading neighbouring Germany to close its border to Tyrol, the region where Schwaz is located. (Photo by Jan Hetfleisch/Getty Images) , Photographer: Jan Hetfleisch/Getty Images Europe

(Bloomberg) -- Austria announced state incentives for getting a coronavirus vaccine as it looks to boost public support for the European Union’s first nationwide mandate.

The state will start a lottery for the vaccinated offering 500 euro ($568) handouts that are valid for hotels, restaurants and other services, Chancellor Karl Nehammer told reporters Thursday. One in ten distributed vaccine shots will be winners.

Municipalities will also get progressive state grants after reaching vaccination rates of 80%, 85% and 90%, respectively. About 72% of all Austrians have been inoculated so far.

Spending on the incentives may reach 1.4 billion euros.

The government is turning to a carrot-and-stick approach as it introduces the first compulsory coronavirus vaccinations in the European Union. The regulation will probably be passed by the parliament’s lower house on Thursday with additional support from two of three opposition parties.

The far-right Freedom Party has opposed the policy, and has led protests in recent weeks that have turned out tens of thousands of people. Multiple demonstrations were planned for Thursday, with police announcing a 300-meter (1,000-foot) security zone around parliament.

Despite a majority of the population supporting the vaccine policy, questions remain on how the government can implement the mandate without excessive controls on society. It also comes as some countries scale back lockdown measures due to the omicron virus variant causing milder symptoms.