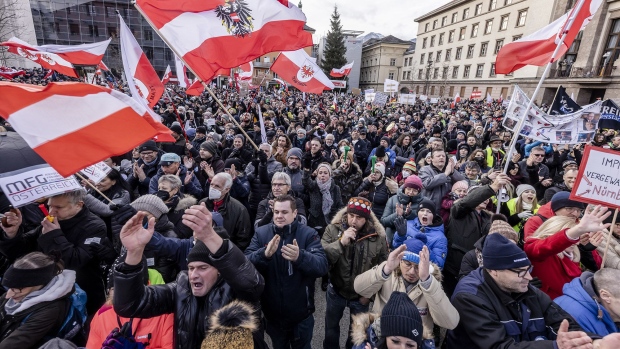 (Bloomberg) -- Austria will impose fines on those without Covid-19 vaccinations from mid-March after a transition phase that starts in February, said Chancellor Karl Nehammer.

People unwilling to get inoculated will face penalties of as much as 3,600 euros ($4,108), the Austrian leader told reporters on Sunday. The mandate will apply to all adults living in the country except when a medical exemption is granted.

Austria’s policy is being closely watched as a model for similar ambitions in other European Union countries. Italy has imposed a vaccine mandate on people aged 50 or over, Greece will start fining seniors who don’t get their shots, and French President Emmanuel Macron has pledged to make life difficult for the unvaccinated.

In the first phase of Austria’s policy, the unvaccinated will get written notification. Starting in mid-March, police and other officials will start checking vaccine status, imposing fines, and ordering vaccine appointments if necessary. Continued dissent will prompt another 600 euro fine after a month.

Fines can be reversed by taking a vaccine within two weeks of being identified.

Nehammer, a former interior minister propelled into the top job after months of political limbo in Austria, has been working on fine-tuning a policy critics say will be difficult to enforce without excessive controls on the public.

More than 20,000 people marched on the streets of Vienna on Saturday in the latest protest against the plan, which has become a key campaign theme for the right-wing Freedom Party. The government also received more than 100,000 comments, many from those opposed to mandates, during a public consultation for the bill on vaccinations.

“I know there was a lot of speculation that this would be a half-hearted quasi-solution,” Nehammer said on Sunday.

Instead, he said, “the controls will have consequences,” and those who don’t comply “will face high fines.”