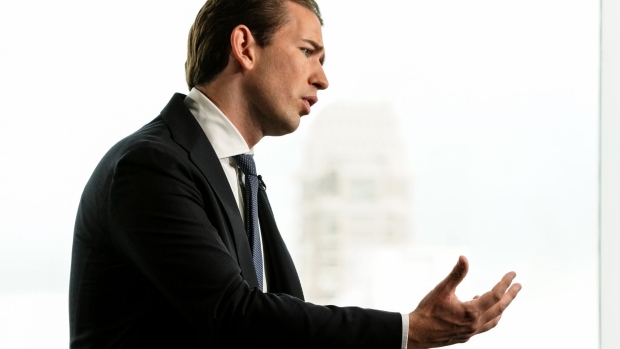 Sebastian Kurz, Austria's chancellor, speaks during a Bloomberg Television interview in New York, U.S. on Wednesday, Sept. 22, 2021. A defeat for Germany's conservatives at weekend elections would be a blow for the center-right European People's Party, according to Kurz. , Bloomberg

(Bloomberg) -- Austrian Chancellor Sebastian Kurz was questioned for more than five hours this month in a perjury probe into statements made to a committee investigating government corruption.

The 151-page transcript of the hearing, reported by local newspapers including Der Standard and Die Presse late Friday, shows Kurz contended that allegations he had made false statements were based on twisted grammatical interpretations.

Kurz faces charges in a probe that’s investigating discrepancies between his claim to a parliamentary committee that he was only marginally involved in personnel changes at a state holding company, and text messages with some of his closest political associates that suggest otherwise. He has denied any wrongdoing.

“I don’t know what you think of me, but I’m not a complete idiot. If I know that they have all these text messages, it would be almost absurd to intentionally say anything different,” Kurz was reported as telling a judge conducting the hearing.

Kurz, 35, confirmed earlier this week in a statement that the hearing had taken place. A spokesperson for the prosecution as well as Kurz’s office declined to comment on Saturday.

The investigation is one of many stemming from the so-called Ibiza affair triggered by leaked videos involving members of the far-right Freedom Party, Kurz’s former coalition partner, which toppled his government.

Former Vice-Chancellor Heinz-Christian Strache was given a suspended 15-month prison sentence in August for taking party donations in exchange for helping change financing rules for a private hospital operator.

Austria’s chancellor has said he won’t resign even if prosecutors file charges against him.

The hearing’s transcript also illustrates Kurz’s frustration with what he sees as a concerted effort by the judiciary and his political opponents to remove him from office.

He was chastened by the judge conducting the hearing for lashing out at prosecutors. He declined to fully respond to questions from the prosecutor in attendance, according to the press reports.

“You are twisting every word I say, that’s unbelievable. I really want to put an end to this. This isn’t working too well between us,” Kurz was cited as telling the prosecutor.