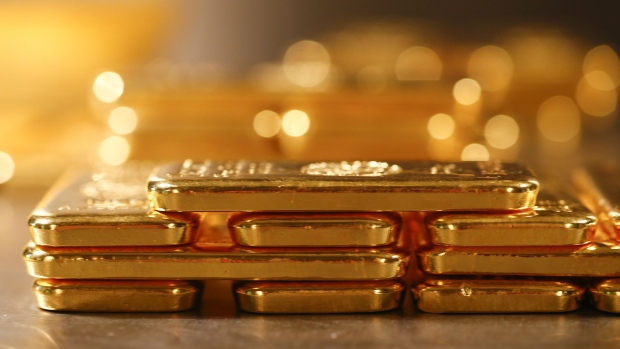 One kilogram fine gold bars sit stacked in the precious metals vault at Pro Aurum KG in Munich, Germany, on Wednesday, July 10, 2019. Gold rose for a third day after the Federal Reserve indicated that it’s preparing to cut interest rates for the first time in a decade as the global economy slows. , Bloomberg

(Bloomberg) -- Austrian prosecutors investigating former politicians of the nationalist Freedom Party found gold bars stashed away in vaults in a small Alpine guesthouse. The party says it bought the gold in the wake of the 2008 financial crisis.

“I guess it would have been better to invest in a savings account with a tumbling bank, in falling shares or Greek bonds,” Freedom Party secretary general Christian Hafenecker said sarcastically in a tweet responding to Profil’s revelations. The party’s Vienna group decided to buy the gold in 2008 with its “financial reserves,” he said.

When they found the vaults, the guesthouse operator told investigators he didn’t have the codes to open them and asked them to wait until party officials arrived from Vienna, a six hours’ drive from the remote village. When they arrived and opened the vaults, they were found to contain three metal strongboxes sealed by a - now deceased - notary.

The officials offered prosecutors to present them a redacted version of the notary’s deed describing the contents rather than opening the strongboxes. According to that deed, they contain 500-gram (about 16 troy ounces) gold bars, each worth around $24,000 at current prices, according to the report.

The number of bars contained in the boxes, and their serial numbers, are redacted. Based on the redacted space, there appear to be several of them, Profil said. The Freedom Party declined to explain the origin of the bars, according to Profil.

Strache is accused of having offered legal changes favoring Austrian gambling firm Novomatic AG in return for Novomatic’s support for a Freedom Party appointee at Casinos Austria AG, the lottery and casinos operator in which the Austrian government and Novomatic both own stakes. Strache and Novomatic have denied the accusations.

To contact the editors responsible for this story: Chad Thomas at cthomas16@bloomberg.net, Lukas Strobl